The O-47 observation monoplane began as Model GA-15 because it was on the drawing board in 1934 when General Aviation Manufacturing Corp. evolved into North American Aviation. The single-engine, mid-wing observation monoplane was developed to meet U.S. Army Air Corps requirements and made its first flight designated XO-47. It was of all-metal construction and had retractable landing gear.

The subsequent production model O-47s were built with the North American Aviation designation of NA-25 at the Inglewood, Calif., plant. The O-47As were powered by a 975-horsepower engine, while the subsequent O-47Bs carried more fuel and were powered by a 1,060-horsepower engine. In the O-47, the observer was stationed in a special compartment in the lower fuselage, giving the airplane a swollen appearance.

North American produced 238 O-47s between 1936 and 1939. They saw little operational service, however, after America entered World War II, although a few were used from overseas bases and as submarine patrols off the U.S. coasts. During the war, O-47s were used mainly as trainers and target tugs. After the war, a few O-47Bs were modified as single-seat commercial airplanes with the center and rear seats removed so they could carry cargo. 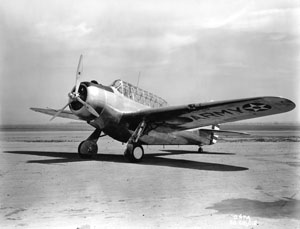