The OV-10 Bronco, a rugged, maneuverable, twin-turboprop, multimission aircraft, served with the U.S. Air Force and Marine Corps (OV-10A). The U.S. Navy also used the OV-10. The Navy squadron VAL-4 Black Ponies flew them with much success in the Vietnam War. Internationally, the OV-10 served with the military services of West Germany (OV-10B), Thailand (OV-10C), Venezuela (OV-10E) and Indonesia (OV-10F).

Designed and built by North American Aviation at Columbus, Ohio, the Bronco was faster and more tactically versatile than helicopters, yet slower and more maneuverable than jets, and could use tactics not possible with either.

In military operations, the Bronco’s ability to find and hit battlefield targets close to friendly troops made it effective against conventional and guerrilla forces.

Military applications for which the Bronco was particularly suited include anti-guerrilla operations, helicopter escort, close air support, armed reconnaissance and forward air control. In addition, it could be used for utility missions such as cargo paradrop — delivery of up to six paratroops, medical evacuation, smoke screening and psychological warfare with leaflets and loudspeakers.

The Bronco’s fuselage was mounted under the wing and provided tandem seating for pilot and observer. Its canopy design afforded better visibility than that of most helicopters. Each crewman was equipped with an LW-3B ejection-seat system, also designed and built at Columbus, which was capable of zero-speed, zero-altitude ejections.

The OV-10 was equipped with seven external store stations and four 7.62 mm guns installed in the sponsons. A variety of conventional ordnance could be delivered in addition to 2,000 rounds of ammunition.

Removal of the armament sponsons and the backseat with its associated armor enabled a quick and simple conversion to a civil action configuration, which permitted the carrying of 3,200 pounds (1452 kilograms) of cargo in the aft fuselage.

For operation in remote areas, the Bronco had a specially designed rough field landing gear, required no ground equipment for starting and could be maintained with simple hand tools. In the event of an emergency, the Bronco could use high-octane or automotive fuel in place of jet fuel with only a slight degradation of power. 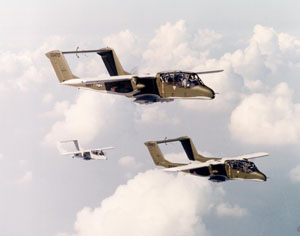