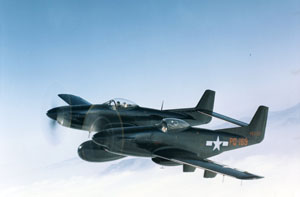 North American produced 250 of the double-fuselage airplanes for the Air Force, embracing three versions of the Twin Mustang then in service, the P-82E, P-82F and P-82G. They were ordered too late for World War II, however.

With a speed of more than 475 mph (764 kph), the Twin Mustang had a combat range of more than 1,600 miles (2,574 kilometers) with full armament. Range could be extended by use of external drop tanks on the wings.

A radical departure from the conventional single-fuselage airplane, the Twin Mustang was formed by two fuselages joined by the wing and the horizontal stabilizer. With a pilot in each fuselage, it reduced the problem of pilot fatigue on ultra-long-range missions. The P-82F and G models carried a radar operator in the right cockpit instead of a co-pilot.

Both engine throttles and both propellers were controllable from either cockpit by manually operated levers. The pilot's cockpit on the left contained the normal flight and engine instruments, while the co-pilot on the right had sufficient instruments for relief and emergency operation. A simplified cockpit arrangement improved pilot comfort, including a tilting, adjustable seat to reduce fatigue during long flights.