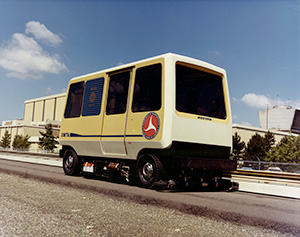 During the 1970s, Boeing designed personal rapid transit (PRT) system rubber-tired, electrically powered vehicles that were silent and emission free. The cars traveled on computerized concrete guideways. During busy times, they had a scheduled route, but otherwise they arrived according to passenger request. Essentially, the system allowed vehicles to wait for people rather than forcing people to wait for vehicles.

A Boeing PRT is still in service at West Virginia University, Morgantown, W.Va.; by November 2014, the cars were transporting about 15,000 riders per day during the school year.

In 1970, UMTA decided to implement the idea at West Virginia University in Morgantown; Boeing won the contract and proceeded to develop and test the cars at the Kent Space Center, Wash.

By the end of 1975, 45 vehicles, a central control and maintenance facility, guideways and passenger stations were serving the university’s campus community. The same year, the International Oceanic Exposition opened in Kobe, Japan, with a similar Boeing-designed personal rapid transit system. It would carry 3 million people by the year’s end but was no longer running by the end of the 1970s.

In 1979, Boeing began work on a fleet of 12-passenger vehicles, called the Advanced Group Rapid Transit (AGRT) project, and set aside 45 acres at its Kent, Wash., facility for a one-mile guideway and control center for the AGRT test program center. Although this effort did not lead to further contracts, it did lead to improvements to the still-rolling Morgantown system.

Morgantown cars serve five stations on an 8.65-mile (13.92-kilometer) track. Powered by electric motors, the computer-driven cars arrive at a station within five minutes of a passenger swiping a West Virginia University student, faculty or staff ID card. Others can ride for 50 cents.

Boeing provided a software upgrade in 2002, but because of its age, the Morgantown system has become increasingly difficult to maintain. A shrinking market for replacement parts has significantly increased replacement costs. In 2012, a system modernization master plan was established to make PRT system upgrades by refurbishing some systems and replacing others.