The Model 15 (PW-9) was the first successful Boeing-designed fighter and established the company as a major American builder of military aircraft.

Its internal bracing was arc-welded tubing rather than the spruce and wire used in older biplanes. However, it still had wooden spars and ribs. It was designated PW-9 (for “pursuit water-cooled design 9”) by the U.S. Army and designated FB-1 by the Navy. 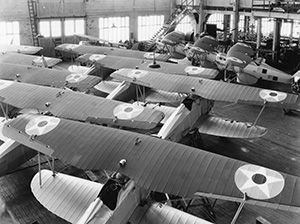