As early as 1949, the Royal Australian Air Force (RAAF) began planning a replacement jet fighter for the locally built Commonwealth Aircraft Corp. (CAC) Mustang and de Havilland Vampire. The Hawker P.1081, a swept wing version of the Hawker Sea Hawk, was initially selected, but Hawker stopped work in November 1950 and RAAF interest shifted to the F-86 Sabre — built by Boeing heritage company North American Aviation — that had recently made its debut over the skies of Korea. At that time, No. 77 Squadron was in combat over Korea and had traded its Mustangs for Gloster Meteors, which were outclassed by their primary opponent: the MiG-15. This made it even more urgent for the RAAF to acquire the Sabre. In April 1951, a license was negotiated with North American for the F-86F and an initial order was placed with CAC for 72 Sabres.

Due in part to the technical investigations initiated by CAC Manager, L. J. Wackett, the RAAF decided to install the 7,500-pound thrust Rolls-Royce Avon RA.7 turbojet in place of the 6,100-pound thrust General Electric J-47 engine. To accommodate the 25 percent increase in air needed for the Avon, a 3.5-inch splice was added to the intake, similar to what would be done on the F-86H. To maintain the original center of gravity, the smaller, lighter engine was mounted farther aft in the fuselage, requiring a new position of the fuselage break needed for engine removal. Other major modifications included a revised cockpit layout and the replacement of the six .50-inch machine guns with two 30 mm Aden cannons. After all of the modifications designed into the airplane by CAC, only about 40 percent of the original airframe remained. The modified airplane was nicknamed the Avon Sabre and was the fastest model of the ubiquitous North American fighter.

RAAF Sabres went into combat when Nos. 3 and 77 Squadrons deployed to Butterworth, Malaya, in October 1958, where they flew more than 11,000 sorties against the Communist guerillas until the state of emergency ended on July 31, 1960. On June 1, 1962, eight Sabres from No. 79 Squadron deployed from Butterworth to Ubon, Thailand, to support the Thai government against communist insurgents, and later contributed to air defense and support for U.S. Air Force operations in Thailand until it withdrew and disbanded in August 1968. The Mirage III began to replace the Sabre in 1964 and the final Avon Sabre was retired on July 31, 1971. 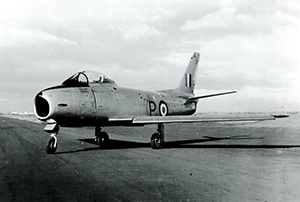