The Saturn V was a multistage liquid-fuel expendable rocket used by NASA’s Apollo and Skylab programs and a massive representation of the power generated when Boeing, McDonnell Douglas and North American Aviation coordinated their efforts.

The largest production model of the Saturn family of rockets, the Saturn V was designed under the direction of Wernher von Braun at the Marshall Space Flight Center in Huntsville, Alabama, with Boeing, North American, McDonnell Douglas and IBM as the lead contractors. By 2007, it was still the most powerful launch vehicle ever flown. The Saturn V had 13 missions: the first 12 for the Apollo program and the 13th to place the McDonnell Douglas Skylab into orbit.

The Saturn V could put a 120-ton (108-tonne) payload into Earth orbit or a 45-ton (40-tonne) payload near the moon. It contained 5.6 million pounds (2.5 million kilograms) of propellant, or 960,000 gallons (3.6 million liters). The assembled vehicle was so heavy that when it was rolled out of the Vehicle Assembly Building at Cape Canaveral, Florida, it pulverized the special gravel roadbed designed to accept its weight.

The first stage (S-IC) came by barge from the Boeing plant at Michoud, Louisiana, and then was placed on a block-long dolly and taken by barge to Cape Kennedy (Cape Canaveral). There, it was raised and made ready for the second stage, which was shipped from California aboard Point Barrow, a converted Navy landing ship. The third stage came from Sacramento, California, aboard the Super Guppy, a swollen version of the Boeing Stratocruiser.

In addition, North American’s Rocketdyne built the five F-1 engines for the first stage, the J-2 engine for the second and third stage, the backup injector for the ascent engine of the Lunar Excursion Module, and the command module’s reaction control system used for capsule repositioning during reentry. North American’s Space and Information Systems division built the command and service modules and the launch escape subsystem.

The S-IC was built by Boeing at NASA’s Michoud Assembly Facility in New Orleans. It was 138 feet (42 meters) tall and 33 feet (10 meters) in diameter and had five engines. It was the largest rocket produced in the United States, with a dry weight of 300,000 pounds (136,077 kilograms). When fueled, it weighed 5 million pounds (15.8 million kilograms).

Boeing’s responsibility to NASA included detailed design, fabrication and assembly of the S-IC in New Orleans and testing of the first stage at the former Mississippi Test Facility (renamed the National Space Technology Laboratories) at nearby Bay St. Louis. Subsequent assignments included systems engineering, vehicle integration and mission support for the entire Saturn V vehicle at Huntsville, spacecraft engineering and assessment at the Kennedy Space Center, and technical staff support to the Apollo program office at NASA headquarters, Washington, D.C.

The second stage (S-II), built by North American Aviation at Seal Beach, California, used liquid hydrogen and liquid oxygen. It had five J-2 engines in a similar arrangement to the S-IC and accelerated the Saturn V through the upper atmosphere. When loaded, 97% of the weight of the stage was propellant. Instead of having an intertank structure to separate the two fuel tanks as was done in the S-IC, the S-II used a common bulkhead consisting of two aluminum sheets separated by a honeycomb structure made of phenol, which insulated against the 125 degrees Fahrenheit (70 degrees Celsius) temperature difference between the two tanks and saved 3.9 tons (3.6 tonnes) in weight.

The third stage (S-IVB), built by McDonnell Douglas in Huntington Beach, California, had one J-2 engine and used the same fuel as the S-II. It also used a common bulkhead to insulate the two tanks. The S-IVB was used first for the orbit insertion after second stage cutoff and then for the translunar injection burn.

Two liquid-fueled auxiliary propulsion system (APS) units, at the aft end of the stage, controlled attitude control during the parking orbit and the translunar phases of the mission. The two APS units were also used as ullage engines to help settle the fuel before the translunar injection burn.

McDonnell Douglas converted one of its S-IVB sections into Skylab, America’s first space station, which was placed into orbit May 14, 1973, by the 13th Saturn V. The section’s internal fuel tanks were converted into an orbital workshop for a three-person crew, with sleeping quarters and storage areas for food, water and other supplies.

Three different three-person crews staffed Skylab and performed hundreds of solar and microgravity experiments. The last astronauts departed Skylab in February 1974. The abandoned space station reentered Earth’s atmosphere and burned up on July 11, 1979. Weighing nearly 100 tons, Skylab orbited Earth for more than 171 days and provided invaluable information about how people are affected by long periods in space as well as data about comets, the cosmos and solar flares. 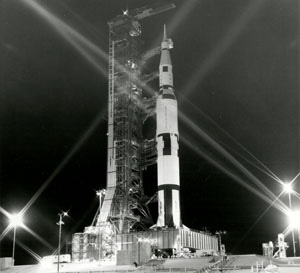