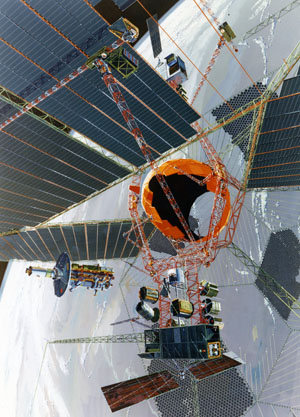 During 1982, Boeing designed a solar power satellite system that could supply most of the United States at the time with electricity. Satellites would be space platforms the size of a small city deployed some 22,000 miles (35,405 kilometers) above the equator in geosynchronous Earth orbit (GEO). Platforms would carry billions of silicon solar cells that would transform sunlight directly into electrical energy transmitted to Earth as microwaves through antennas. Rectifying antennas on the ground would convert the microwaves to direct-current electricity, which would be fed into the nation’s power lines. A three-year evaluation study conducted by the Department of Energy (DOE) and NASA concluded that there were no known insurmountable technical, environmental or economic issues that should stop the development of the solar power satellite.

The Boeing solar power satellites could be constructed either in low Earth orbit (LEO) for later shipment to the higher geosynchronous orbit or constructed directly at the higher orbit. Heavy-lift launch vehicles would carry cargo pallets into LEO, where they would be directed to docking stations at a space construction base. A modified space shuttle orbiter could carry the personnel needed on the orbiting construction site much as the International Space Station was subsequently constructed.

Boeing asked Congress to embark on a phased plan that would progress from concept definition to technology verification to subscale demonstration. The greatest apparent stumbling block seemed to be political rather than technological. At the time, NASA’s first priority was space rather than energy, and the DOE was not involved with research involving space. In 1998, Congress authorized modest funding for further concept development.

During the energy crisis of 2007, the National Security Space Office of the U.S. Department of Defense received a recommendation from a study group of 13 leading research organizations and space advocacy groups that space-based solar power receive substantial national investment. By the 21st century, the Boeing team working on solar power satellites had decades of experience.

In the 1970s, Rockwell studies had concluded that that solar concentrator arrays can survive the tough environments of outer space. Rockwell developed a preliminary design for a hardened solar concentrator. Rockwell also studied a way to use mirrors that concentrated the sunlight in a solar furnace to heat fluid, powering electricity-generating turbine engines.

Over the years, Boeing scientists proposed and managed a half-dozen related contracts for NASA and produced about a dozen related publications. These activities included a conceptual design of a robotically constructed GEO satellite and work on smaller scale, laser-photovoltaic satellites and transmission systems, which used receivers on Earth to produce solar-photovoltaic power. Other Boeing research and development projects explored a range of applications for beamed power technology, including microwave technology for space solar power.

Boeing scientists reworked the Lunar Rover still on Earth to see if a laser-powered Lunar Rover, using wireless power transmission, could reach permanently shadowed lunar polar areas that may contain ice, and they studied the construction of a large solar power satellite to produce cryogenic propellants from water. They also looked at how a space colony on the moon could find, shape and transport the materials to build the huge satellites more economically than by building them in space, which required launching space solar power satellite components from Earth. Boeing scientists also led a study on solar power satellites presented to the National Security Space Office and participated in a NASA/DOD study of options for a near-term demonstration of space solar power technology in LEO.

Spectrolab set a world record for the first solar cell to convert 41.6 percent of concentrated sunlight into electricity and won many awards. In November 2008, Spectrolab received the SpotBeam Award for Space Innovation from the California Space Authority in recognition of its 50 years of advancements in photovoltaic solar cell technology, solar panels and related products, noting that Spectrolab cells powered 60 percent of all satellites orbiting the Earth as well as the International Space Station.