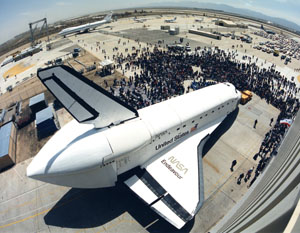 The Space Shuttle Orbiter became a Boeing program in 1996, when the company purchased Rockwell International's aerospace and defense assets. The Orbiter—the world’s first reusable spacecraft—supported humanity’s most challenging engineering project, the International Space Station (ISS). It launched, recovered and repaired satellites and hosted more than 2,000 scientific experiments. During its 30 years of service, 355 people from 16 countries flew 852 times aboard the shuttles.

On July 26, 1972, North American Rockwell (which became Rockwell International in 1973) won a $2.6 billion contract to build the Space Shuttle Orbiter, designated OV-101 (orbiter vehicle 101). The first test shuttle, the Enterprise, rolled out Sept. 17, 1976. From Jan. 31 to Oct. 26, 1977, it used a Boeing 747, modified as a shuttle carrier aircraft, to take it to the upper atmosphere for the approach and landing test program. The tests showed that the Orbiter could fly in the atmosphere and land like an airplane.

The Enterprise remained a test article. Its legacy of information was incorporated into the next shuttle, the Columbia (OV-102). On April 12, 1981, the Columbia was the first Space Shuttle to fly into orbit. During its 27 flights between 1981 and 2002, the Columbia's achievements included the first launch of satellites from a Space Shuttle, the first flight of the European-built scientific workshop called Spacelab and servicing the Hubble Space Telescope. The Columbia and its seven astronauts were lost Feb. 1, 2003, when the vehicle broke up over Texas during reentry from orbit. The program was then suspended until Space Shuttle Discovery returned to flight on July 28, 2005.

The Challenger (OV-99) was the second Orbiter to become operational at Kennedy Space Center in Florida. It joined the NASA fleet in July 1982, flew nine successful missions, made 987 orbits and spent 69 days in space. Then on Jan. 28, 1986, the Challenger and its seven-member crew were lost 73 seconds after launch.

The third shuttle, the Discovery (OV 103), had arrived at Kennedy Space Center in November 1983. On its first mission, on Aug. 30, 1984, it deployed three communications satellites. After modifications, it flew the first Space Shuttle mission of the post-Challenger era on Sept. 29, 1988. On March 9, 2011, it touched down after its final flight.

The Atlantis (OV-104) made its first orbital flight Oct. 3, 1985. During its second flight, Nov. 26, 1985, its astronaut crew conducted the first experiments for assembling structures in space. It was modified and returned into orbit Dec. 2, 1988. The May 19, 2000, launch of the Space Shuttle Atlantis introduced a host of enhancements, including an adaptation of the glass cockpit system used in the Boeing 777. The Space Shuttle used Ku-band radar, built by Boeing Satellite Systems, to communicate with the ground. The radar function can pinpoint objects in space as far away as 345 miles (555 kilometers) for shuttle rendezvous. By linking with a NASA satellite, the communications function allowed crews to transmit television-like pictures, voice messages and high-speed data streams.

In 1996, Boeing and Lockheed Martin created the standalone company United Space Alliance (USA). USA served as NASA's primary industry partner in human space operations for the day-to-day management of the Space Shuttle fleet and the planning, training and operations for 55 Space Shuttle missions.

As the major subcontractor to USA, Boeing integrated shuttle system elements and payloads; it also provided operations support services and ongoing engineering support. Since 1987, Boeing had already been the prime contractor to SPACEHAB Inc. for design, maintenance, integration and operation of pressurized, habitable modules that were carried in the payload bay of the Space Shuttle to facilitate logistics delivery and science research.

The Atlantis is on display at the Kennedy Space Center Visitor Complex, Cape Canaveral, Fla.; the Endeavour can be seen at the California Science Center in Los Angeles.