On New Year's Eve 1966, after more than 14 years of study, design work and competition, the U.S. federal government selected Boeing to build the prototype for the country's first supersonic transport (SST).

Twenty-six airlines ordered 122 of the transports. The final design featured a double-jointed, needle-shaped nose that would drop during takeoff and landing for improved pilot visibility.

Government funding was withdrawn in 1971 before the prototype was finished. However, the Boeing SST fostered advances in supersonic transportation, leading to the High Speed Civil Transport project that ran from 1990 to 1999, part of the NASA High-Speed Research program supported by a team of U.S. aerospace companies. 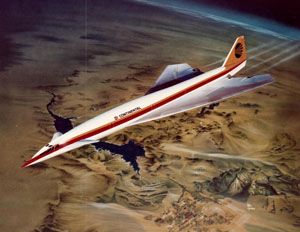