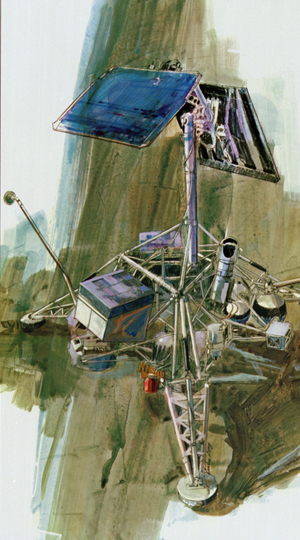 Built for NASA by Hughes Aircraft Co., the Surveyors were robotic spacecraft used as pathfinders for subsequent landings of humans on the moon. During 1966 and 1967, five made successful landings in support of the Apollo program.

Surveyor 1 was launched to the moon four months after Luna 9 on a direct-ascent trajectory. It was powered by three liquid-propellant variable-thrust engines and one solid propellant main engine. It proceeded to a near-hover at 13 feet (4 meters) and then made a freefall to a landing. Shock-absorber legs and crushable pads on the frame softened the blow of the impact. For the next six weeks, including a two-week-long shutdown for the lunar night, Surveyor 1 transmitted 11,237 pictures back to Earth, all in high resolution and color.

Surveyor 2 was lost because an engine failed to fire; however, Surveyor 3 bounced twice yet still managed to send back 6,300 pictures. Many of these were of its mechanical scoop used to dig 7 inches into the lunar soil. Observations and readings indicated that the soil was similar to wet beach sand and could support a human and a lander vehicle. Apollo 12 later landed within a quarter mile (402 meters) of Surveyor 3, and astronauts retrieved parts of it to determine the effects of long exposure to the lunar environment.

Surveyor 4 was lost after transmissions ceased. Surveyor 5 carried a material that irradiated the soil so that its composition could be analyzed, and Surveyor 6 hopped 8 feet (2.4 meters) away from its landing site for more pictures.

Surveyor 7 was sent to the rim of the lunar crater Tycho. The spacecraft transmitted more that 21,000 pictures, including images of two laser beams from stations on Earth.