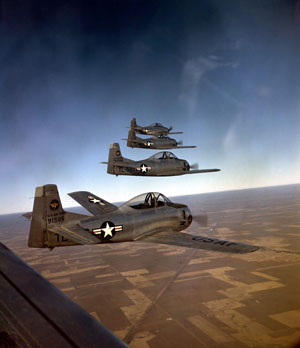 The North American Aviation T-28 was a basic trainer that was ordered in three advanced versions, the T-28A for the U.S Air Force and T-28B and T-28C, by the U.S. Navy, with the latter version designed for carrier operation. It was the first trainer designed to transition pilots to using jet aircraft.

The T-28B and T-28C could handle accessory kits providing for bombs, rockets and machine guns.

1,194 T-28As were delivered to the U.S. Air Force and the Navy ordered 792 T-28s, 299 of which were T-28Cs that included an arrester hook for carrier landings. Some versions of the T-28 were adapted to more extensive military operations by other countries.