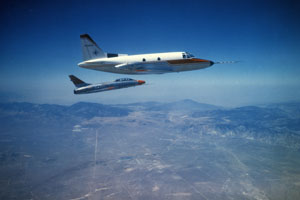 A twin-jet, multipurpose aircraft, the military version of the North American Aviation Sabreliner was designated the T-39 by the U.S. Air Force and Navy.

Basic configuration of the military versions provided for a crew of two and four passengers. The interior could be modified from a radar or navigational trainer configuration to that of a cargo or passenger carrier in a matter of minutes. As a cargo carrier, the aircraft could transport items weighing up to 2,300 pounds (589 kilograms) with a length of 16 feet (5 meters). Seat tie-down fittings were suitable for use as cargo rings in lashing down equipment.

The civilian version of the T-39 Sabreliner, developed in 1962, was North American’s only successful commercial aircraft, and the Sabreliner Division was established to build the new jet. The civilian version of the Sabreliner was essentially the same as the military version, but provided for installation of deicing boots, autopilot and other communications and navigation equipment not required by the armed services. It could accommodate a crew of two and up to seven passengers.

North American built a total of 599 Sabreliners, 204 of which were for the military. The company changed its name to Rockwell International in 1973 and sold its Sabreliner Division to private investors in 1983. In January 2014, Innovative Capital Holdings acquired the assets of the resulting Sabreliner Corp. and reorganized as Sabreliner Aviation.