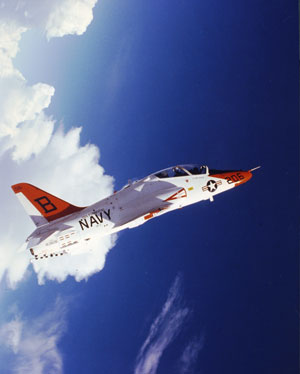 In 1978, McDonnell Douglas and British Aerospace developed the T-45A Goshawk, a carrier-suitable version of the British Aerospace Hawk. The first Hawk, which flew Aug. 21, 1974, was established as the Royal Air Force principal jet trainer and served the U.S. and European air forces.

The Navy awarded the T-45 Training Systems contract to the McDonnell Douglas and British Aerospace team in November 1981, with McDonnell as the prime contractor. McDonnell and British Aerospace collaborated on significant modifications to make the basic Hawk design aircraft carrier suitable as the T-45A, a two-seat, single-engine jet trainer that is approximately 39 feet (12 meters) long, 14 feet (4 meters) high with a wingspan of 30 feet, 10 inches (9.4 meters).

The U.S. Navy ordered more than 125 T-45A Goshawks, intending to use them to replace the TA-4J Skyhawk in the Advanced Jet Training program and the T-2 Buckeye in the Intermediate Jet Pilot Training program. The Navy chose “Goshawk” as the name for the T-45A in 1985. The name originally was assigned to the Curtiss F11C, a U.S. Navy fighter aircraft in 1932.

The aft fuselage and wings of the Goshawk were built by British Aerospace in the United Kingdom; McDonnell Douglas assembled the forward fuselage at its Long Beach, Calif., plant and performed final assembly and production testing in Palmdale, Calif. Final assembly of the first production model of the Goshawk began in December 1988 in Air Force Plant 42 at Palmdale. In 1989, McDonnell Douglas moved production of the T-45 program to its St. Louis, Mo., facility.

The T-45C, with a digital cockpit to train pilots destined for the F/A-18 Hornet, the AV-8B Harrier II and other carrier-based aircraft, made its first flight in October 1997. It had two multifunction displays in each cockpit; the displays provided navigation, weapon delivery, aircraft performance and communication data.

Boeing delivered the 221st and final T-45 training jet to the Navy in November 2009. The company continued to support the T-45 fleet by providing engineering, logistics and support equipment in partnership with BAE Systems, the successor company to British Aerospace, which had supplied the aircraft’s rear and center fuselage sections, wing assembly and vertical tail.

On Aug. 26, 2010, Boeing joined the U.S. Navy at Cecil Field in Jacksonville, Fla., to celebrate the Naval Air Training Command’s one millionth flight-hour with the T-45 Goshawk. The Goshawk had become a component of the fully integrated T-45 training system, which also included high-fidelity instrument and flight simulators, computer-assisted classroom learning, an automated training-management asset and contractor logistics support.