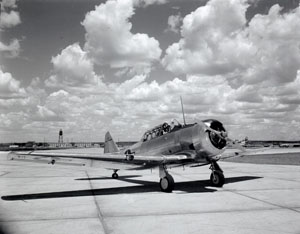 The North American Aviation T-6 Texan two-place advanced trainer was the classroom for most of the Allied pilots who flew in World War II. Called the SNJ by the Navy and the Harvard by the British Royal Air Force, the advanced trainer AT-6 was designed as a transition trainer between basic trainers and first-line tactical aircraft. It was redesignated T-6 in 1948.

In all, the T-6 trained several hundred thousand pilots in 34 different countries over a period of 25 years. A total of 15,495 of the planes were made. Though most famous as a trainer, the T-6 Texan also won honors in World War II and in the early days of the Korean War.

The Texan evolved from the company’s BC-1 basic combat trainer, which was first produced for the U.S. Army Air Corps with fixed landing gear in 1937 under a contract that called for 177 planes. North American designed the NA-49 prototype as a low-cost trainer with many of the characteristics of a high-speed fighter.

Although not as fast as a fighter, it was easy to maintain and repair, had more maneuverability and was easier to handle. A pilot’s airplane, it could roll, Immelmann, loop, spin, snap and vertical roll. It was designed to give the best possible training in all types of tactics, from ground strafing to bombardment and aerial dogfighting. It contained such versatile equipment as bomb racks, blind flying instrumentation, gun and standard cameras, fixed and flexible guns, and just about every other device that military pilots had to operate.