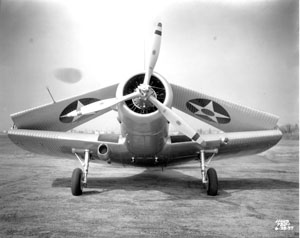 When the U.S. Navy placed a contract with Douglas Aircraft Co. for the development of the TBD torpedo bomber in 1934, a new era in naval aviation began. Biplanes on carrier decks would soon be consigned to history.

The TBD Devastator was the Navy’s first all-metal, monoplane torpedo bomber. It was also the Navy’s first production carrier-based plane to come with an enclosed cockpit, and the first to use main landing gear wheel brakes. While most carrier-based aircraft of the day had manually folded wings for storage aboard ship, the TBD featured hydraulic folding wings. The plane had a crew of three (pilot, bombardier and gunner) and carried a half-ton (0.45-tonne) torpedo. It entered service with the fleet in 1937. One sailor, after looking it over, said, “It’s got everything but the kitchen sink.”

In December 1941, 100 TBD Devastators formed the backbone of the Navy’s carrier torpedo force in the Pacific. During hit-and-run raids against Japanese bases in the Central Pacific in early 1942, TBDs sank two transports and destroyed or damaged 10 other vessels. In May 1942, during the Battle of the Coral Sea, TBDs helped sink one enemy carrier and heavily damage another. These early actions, however, revealed the Devastator’s shortcomings in speed and range and exposed problems with its main offensive weapon: its torpedoes often failed to explode.

The TBD next saw action in the Battle of Midway in June. This was a complete victory for the Navy, but of the 41 Devastators that took part in the battle’s first day, only six made it back to their carriers. The TBD’s slow speed, light defensive armament and poor maneuverability made it easy prey for the famous Japanese Zero fighter. On the last day of the battle, however, three TBDs did help sink one heavy cruiser and seriously damage another.

An aircraft of advanced design in 1934, the Devastator was obsolete by 1942. Its first six months of combat would be its last. The TBD was withdrawn from front-line service in summer 1942 but continued in service as an advanced trainer until the end of the war. A total of 130 TBDs were built.