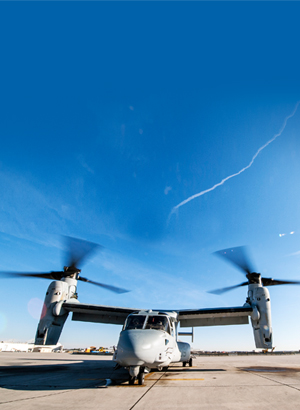 The V-22 Osprey was the first aircraft designed from the ground up to meet the needs of all four U.S. armed services. In partnership with Boeing, Bell Helicopter Textron built the tiltrotor aircraft that takes off and lands vertically like a helicopter, and once airborne, can convert to a turboprop airplane capable of high-speed and high-altitude flight. Boeing was assigned responsibility for the fuselage, all subsystems, digital avionics and fly-by-wire flight-control systems.

By 1997, requirements called for production of 523 Ospreys, with the first to enter service during 1999. The first V-22 built to production standards made its first flight in February 1997 and was delivered March 15, 1997, to the V-22 integrated test team at the Patuxent River Naval Air Warfare Center in Maryland. Eleven were produced by the end of 2000.

On June 13, 2013, the Bell Boeing V-22 program was awarded a five-year U.S. Naval Air Systems Command (NAVAIR) contract for the production and delivery of 99 V-22 Osprey tiltrotor aircraft, including 92 MV-22 models for the Marine Corps and seven CV-22 models for the Air Force Special Operations Command. The contract also included a provision permitting NAVAIR to order up to 23 additional aircraft. At that time, more than 200 V-22 Ospreys were in operation and the worldwide fleet had amassed more than 185,000 flight-hours, with half of those hours logged in the previous three years.