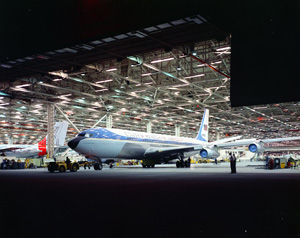 The airplane used to transport the president of the United States is known by the radio call sign used when the president is aboard: Air Force One.

The first purpose-built Air Force One was based on the long-range Boeing 707-320 Intercontinental, which was the most commonly ordered version of the 707 airliner. Its fuselage was 8 feet (2.4 meters) longer than the 707-120, and its wingspan was 12 feet (3.7 meters) longer.

President John F. Kennedy’s wife, Jacqueline Kennedy, selected the colors of the first Air Force One, VC-137C. The 707s served as presidential aircraft until they were replaced by 747-200s, designated VC-25A, in 1990. Principal differences between Air Force One and the standard Boeing 747 include state-of-the-art navigation, electronic and communications equipment; its interior configuration and furnishings; self-contained baggage loader; and front and aft airstairs. The “flying Oval Office” has 4,000 square feet (371 square meters) of interior floor space with presidential living quarters, office areas, work and rest areas for staff, press and crews, and two galleys that can serve 100 at one sitting. Air Force One is crewed by U.S. Air Force personnel.