After World War II, the Royal Australian Air Force (RAAF) required a new basic two-seat trainer aircraft to replace the quickly aging and increasingly obsolete Tiger Moth, as well as the highly successful Wirraway. The Commonwealth Aircraft Corp. (CAC), just over a decade into operation, first designed what became the CA-22 Winjeel A85-401 in 1948. The Winjeel, an Aboriginal word translating to “young eagle,“ went through a lengthy design process, which took the project through several versions before the final CA-25 model.

CAC began manufacturing the first Winjeels in July 1949, with the first prototype flying Feb. 3, 1951. CAC test pilot John Miles, a World War II veteran pilot trained in England who had flying experience in Europe and Africa, flew the first Winjeel. However, CAC sought revisions to the Winjeel as the RAAF added requirements, actually requesting a less stable aircraft for training purposes. RAAF flight training needed its training pilots to be able to experience spinning and perform spinning recovery. Yet it took another four years of research, development and testing to prepare the first Winjeels for delivery in February 1955. The CA-22 Winjeel that Miles flew evolved into the CA-25, and CAC delivered the first 62 to the No. 1 Basic Flight Training School of New South Wales in Uranquinty in September 1955, and the last group in January 1958.

From the CA-22 to the CA-25, CAC made major modifications to the rudders, fins and engines. Originally, the Winjeel was designed to have indigenously built CAC engines built in-house, yet CAC would later turn to Pratt & Whitney for the power plants. The rudders and fins were moved forward from the original design and CAC made revisions to the engine cowling design. These design modifications continued until 1953 when the RAAF made the decision to order 62 of the aircraft.

The first production flight by the training school came Feb. 23, 1955. The unit was later transferred to the RAAF base at Point Cook in December 1958. In addition to training, the Winjeel served in the Forward Air Control training role with No. 4 Flight, which later joined No. 76 Squadron. The Winjeel was not designed to carry armament as a trainer aircraft, yet several training missions called for the aircraft to carry smoke bombs to make training targets for pilots.

Despite the success of the Winjeel and its uses in training many Australian pilots, the RAAF considered replacing the trainer in 1968 with the Italian-designed Macchi MB-326. Yet, the military ultimately retained the Winjeel. By 1975, the RAAF again sought to phase out the Winjeel by replacing the trainer with the CT-4 Airtrainer manufactured by Pacific Aerospace Corp. in New Zealand. In the 1970s, the RAAF sought to make all trainers jet-powered aircraft to best prepare pilots for the jet aircraft in the broader fleet.

The RAAF decided to continue use of the Winjeel another two decades into the 1990s, even though the Swiss-built Pilatus PC-9/A became the chief trainer for the military. The Macchi and the CT-4 did not fully replace the Winjeel, however, as the CAC aircraft remained in service until 1994 before many were transferred into private ownership, owing to the capabilities of the Winjeel. 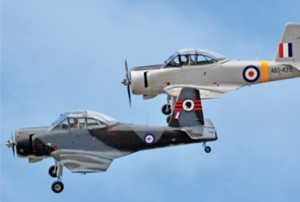