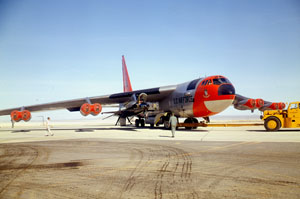 On June 8, 1959, a sleek black aircraft was released from a NASA NB-52B flying at 37,550 feet (11,445 meters), marking the first flight of the X-15 rocket plane. With North American Aviation test pilot and engineer Scott Crossfield in the cockpit, the unpowered test flight initiated a 10-year effort that achieved hypersonic speeds and explored the upper edge of the Earth’s atmosphere.

The X-15 rocket research airplane was built by the Los Angeles Division of North American Aviation for the U.S. Air Force, the U.S. Navy, and the National Aeronautics and Space Administration. The airplane was designed to conduct research experiments during actual flight conditions beyond the Earth’s atmosphere.

With the concurrent Mercury manned spaceflight program, the United States was on a fast track into space but lacked critical data needed to achieve that goal. The X-15 program would be called on to obtain knowledge of aerodynamic heating, reentry conditions, acceleration and deceleration forces, and reactions of man to weightlessness.

A new version, known as the X-15A-2, designed for flight at eight times faster than sound, at an altitude of 100,000 feet (30,480 meters) and creating potential temperatures of more than 2,400 degrees Fahrenheit (1316 degrees Celsius), was turned over to the U.S. Air Force by the Los Angeles plant in February 1964.

Air Force Capt. William “Pete” Knight took the X-15A-2 to the fastest speed recorded during the program, Mach 6.7, during an Oct. 3, 1967 flight that reached an altitude of 102,100 feet (31,120 meters). Knight had traveled twice as fast as a bullet fired from an M-16 automatic rifle, and the unofficial speed record stood until the Space Shuttle first reentered the atmosphere at Mach 22 in April 1981.

The X-15 provided the Space Shuttle design team with invaluable information on hypersonic flight, in particular, how to reenter the earth’s atmosphere with a winged vehicle and how to precisely land a low L/D (lift-to-drag) unpowered vehicle.

Later, two X-15 pilots became NASA astronauts — Neil Armstrong, on the Gemini and Apollo programs, and Joe Engle, who commanded the space shuttle Columbia on its second flight (STS-2) in November 1981 and Discovery in September 1985 (STS-51I).