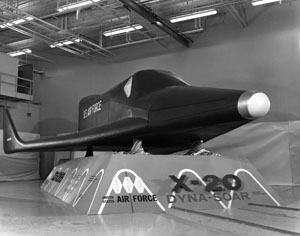 The Dyna-Soar, designed to be a 35.5-foot (10.8-meter) piloted reusable space vehicle, had a sharply swept delta 20.4-foot-span (62-meter-span) wing and a graphite and zirconia composite nose cap and used three retractable struts for landing. Eleven manned flights were to be launched from Cape Canaveral, Fla., starting in November 1964. Dyna-Soar’s first orbital flight was tentatively scheduled for early 1965.

The X-20 reached the mockup stage. $410 million had been spent on its development, and a cadre of astronauts was training to fly it. However, the U.S. government canceled the program on Dec. 10, 1963, because Dyna-Soar had no viable military mission and was too expensive for a research vehicle. Congress diverted the X-20 funding to the Manned Orbiting Laboratory, which used McDonnell-built Gemini capsules. The partially completed X-20 prototype and the mockup were scrapped as well as initial tooling set up for a production line for 10 space planes.

In 1961, the U.S. Air Force had contracted with McDonnell Aircraft to build six experimental aerodynamic/elastic structures environment test vehicles that roughly resembled the Dyna-Soar. The scaled-down test vehicles were 5.7 feet (1.7 meters) long and used Douglas-built Thor or Thor-Delta boosters, which in turn used engines built by North American’s Rocketdyne division. The program was very successful and demonstrated that winged reentry vehicles could traverse the upper atmosphere.