The single experimental Douglas X-3, called the Stiletto because of its knife-like shape, was built to test the effects of high temperatures induced by high speeds on an aircraft, to investigate the use of new materials such as titanium, and to explore new construction techniques.

Maj. Charles E. Yeager, who was the first pilot to exceed the speed of sound, was part of the inspection team for the Stiletto mockup. The unusual aircraft had a long, tapered nose, which contained most of its 1,200 pounds (544 kilograms) of instrumentation, and tiny wings. The two engines were side by side in the fuselage, and the pilot’s downward ejector seat in the pressurized cockpit also operated as an electronically controlled lift.

Although the aircraft never reached the speeds it was designed for, it contributed greatly to the development of high-speed aircraft. Data obtained with the X-3 was distributed throughout the U.S. aviation industry. 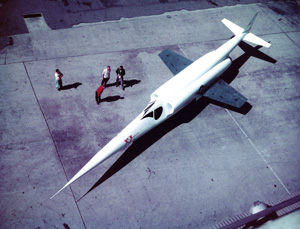