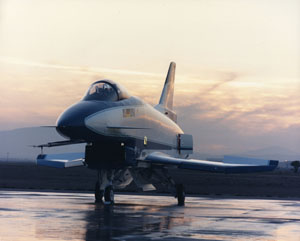 The thrust vectoring system of the X-31 consisted of three paddles at the rear of the fuselage that could direct the jet engine’s thrust. The system provided precise control at high angles of attack (AOA) where conventional aircraft would lose aerodynamic control.

During the 581 flights of the EFM program, the X-31 flew well beyond the aerodynamic limits of any conventional aircraft by demonstrating controlled flight at 70 degrees AOA, a controlled roll at around 70 degrees AOA, and a rapid minimum radius, 180-degree turn using a post-stall maneuver, dubbed the “Herbst Maneuver” after Wolfgang Herbst, a German proponent of using post-stall flight in air-to-air combat.

On January 19, 1995, near the end of a 43-minute mission, ice formed in one of the X-31’s pitot tubes, incorrect data was sent to the flight control’s computers and the aircraft oscillated uncontrollably and pitched. The pilot ejected safely and the plane crashed near the northern edge of Edwards Air Force Base, Edwards, Calif.

The remaining X-31 went on to fly 21 demonstration flights at the 1995 Paris Air Show, where its performance wowed the crowds. Following the EFM program’s conclusion in June 1995, this aircraft was transferred to the U.S. Navy Test Pilot School at the Patuxent River Naval Air Station in Maryland.

In its final flight on April 29, 2003, the X-31 performed the last in a series of fully automated ESTOL landings on an actual runway, approaching at a high 24-degree AOA (twice the normal 12-degree AOA) at only 121 knots (34 mph, 55 kph), more than 30 percent slower than the normal 175-knot (201-mph, 324-kph) landing speed. The program ended in May 2003, and later that year, Boeing and the X-31 team — past and present — received the von Karman award from the International Council of the Aeronautical Sciences.

The remaining X-31 aircraft is on display in Munich’s Deutsches Museum.