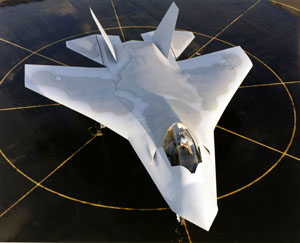 In 1996, the U.S. Department of Defense awarded Boeing a four-year contract for the concept demonstration phase of the Joint Strike Fighter (JSF) program competition. The goal was to develop a low-cost, multirole tactical aircraft for the U.S. Air Force, Navy and Marine Corps and the United Kingdom’s Royal Navy and Royal Air Force.

Boeing was required to build concept demonstration aircraft that would provide commonality across variants in operation, design and manufacture; direct-lift propulsion for short takeoff and vertical landing (STOVL), hover and transition between vertical and conventional flight; and capability to approach a carrier at low speeds. Boeing assembled two concept demonstration aircraft, X-32A and X-32B, at its plant in Palmdale, Calif.

On Sept. 18, 2000, the X-32A made its first flight from Palmdale to Edwards Air Force Base, Calif. The X-32A demonstrated conventional takeoff and landing characteristics for the Air Force as well as carrier approach flying qualities for the Navy. The aircraft made 66 flights during four months of testing. The flights validated the aircraft’s handling qualities for inflight refueling, weapons bay operations and supersonic flight.

The X-32B aircraft made its first flight on March 29, 2001. It made 78 test flights in four months, including a transcontinental ferry flight from Edwards Air Force Base to Naval Air Station Patuxent River, Md. The aircraft successfully transitioned to and from STOVL flight mode by using its direct-lift system to redirect thrust from the aircraft’s cruise nozzle to the lift nozzles. The X-32B also demonstrated its ability to hover and make vertical landings.

The flight tests, which ended in July 2001, demonstrated matching of actual flight performance with computer predictions based on years of simulation, an accomplishment that had never before been achieved.

Although not selected for full-scale development of the JSF, Boeing viewed its involvement in the competition as a strategic investment. The program yielded many advances in stealth technology and design and manufacturing methods. These achievements have been applied to other Boeing programs including the F/A-18E/F Super Hornet and the X-45A Unmanned Combat Air Vehicle, or UCAV.