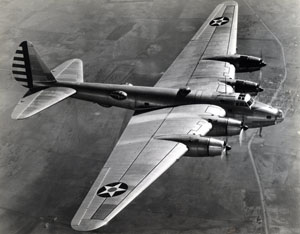 The mammoth Boeing XB-15 began in 1934 as a design study for the U.S. Army to see if it was possible to build a heavy bomber with a 5,000-mile range. When it made its first flight, it was the largest and heaviest plane ever built in the United States. It was so large that the crew could go through passages in the wing to make minor repairs while the airplane was flying.

Because a long-range flight, powered by the engines of the time, took several days, the crew had bunks to sleep on between shifts. The XB-15 had been designed for four 1,000-horsepower liquid-cooled engines, but because those engines were not available in time, it was powered by 850-horsepower engines. Nonetheless, it set several load-to-altitude records, including taking a 31,205-pound payload to 8,200 feet on July 30, 1939.

Because the lone XB-15 was an experimental airplane, it did not serve as a bomber during World War II. The military converted it into a cargo carrier, designated the XC-105.