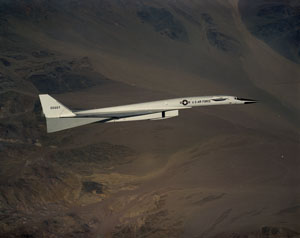 The XB-70A, built by the North American Aviation (NAA) Los Angeles Division for the U.S. Air Force, was an experimental high-speed, delta-wing aircraft designed to fly at three times the speed of sound and higher than 70,000 feet (21,000 kilometers).

On Sept. 21, 1964, 5,000 employees and guests at Air Force Plant 42 in Palmdale, Calif., watched as NAA Chief Pilot Alvin White and U.S. Air Force copilot Joseph Cotton took the graceful six-engine giant up for its first flight. It was the culmination of an effort that began in 1954, when both Boeing and NAA submitted designs for the Air Force Weapon System 110A competition, and on Dec. 23, 1957, NAA won the competition.

However, federal budget cutbacks and advances in Soviet air defenses resulted in an emphasis on less expensive and theoretically more survivable intercontinental ballistic missiles as the mainstay of U.S. nuclear forces. On April 10, 1961, the Air Force cut back the B-70 to a research program, and only two of the aircraft would be built. A second Valkyrie, the XB-70A-2, flew on July 17, 1965.

The B-70 introduced an array of new technologies including a design that relied on an aerodynamic theory called “compression lift.” At supersonic speeds, the fuselage of the B-70 would create a shock wave. The inlet wedge at the front of the delta wings would create a disturbance in that shock wave, causing it to slow and build pressure under the wings, generating up to 40 pounds per square foot (1.9 kilopascals) of additional lift at Mach 3. To increase directional stability and cruise efficiency, and to hold the shock wave, a third of the wing could fold down as much as 65 degrees.

To survive an environment where sustained aerodynamic heating created aircraft skin temperatures ranging from 475 to 630 degrees Fahrenheit (246 to 332 degrees Celsius), NAA used titanium for 9 percent of the airplanes’ construction. To avoid using rare and expensive titanium, NAA came up with a high strength skin that could beat the heat by developing a steel honeycomb sandwich skin that was manufactured using brazing to join metal to metal, rather than welding. This technique later became widely used throughout the aerospace industry.

With a maximum takeoff weight of 542,000 pounds (245,847 kilograms), the XB-70 remains the largest and heaviest airplane ever to fly at Mach 3. A rugged landing gear, weighing more than 6 tons (5.4 tonnes) and consisting of 2 tons (1.8 tonnes) of wheels, tires and brakes supported the XB-70 on the ground. Each main gear had four wheels and the nose gear two. In a single stop, the XB-70 absorbed kinetic energy equivalent to that used to stop 800 medium-sized automobiles from a speed of about 100 mph (61 kph).

On June 8, 1966, an accident during a photo flight took the lives of two pilots and destroyed two airplanes—the XB-70A-2 and an F-104 that had been captured by the Valkyrie’s vortex wake.

The surviving Valkyrie, XB-70A-1, continued to fly for NASA testing the flight regime of a supersonic transport and was later added to the collection at the National Museum of the U.S. Air Force in Dayton, Ohio, on Feb 4, 1969.