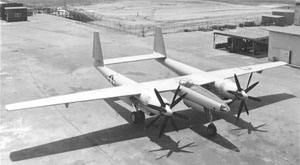 The Hughes XF-11 was designed to be a fast, long-range reconnaissance aircraft for the U.S. Army Air Forces. The XF-11 was a twin-engine, twin-boom, all-metal monoplane with a pressurized cockpit and tricycle landing gear. The first prototype featured a pair of four-bladed contra-rotating propellers. This unusual design increased performance and stability but added a great deal of mechanical complexity.

The Air Force originally ordered 100 XF-11s, but the order was canceled at the end of World War II, leaving Hughes with two prototypes.

Howard Hughes was flying the first prototype when it crashed on July 7, 1946, on its maiden flight. An oil leak caused the right engine propeller controls to malfunction, so the rear propeller reversed its pitch, making the aircraft difficult to control. Hughes tried to make an emergency landing on the Los Angeles Country Club’s golf course, but about 300 yards short of the course, the aircraft suddenly lost altitude and clipped three houses. The third house was completely destroyed by the fire resulting from the crash, and Hughes was badly hurt.

The second prototype was fitted with conventional propellers. After Hughes had recovered from his injuries, he flew it successfully on April 5, 1947. However, it was not stable at low speeds, so the Air Force ordered the Boeing RB-50 (a reconnaissance version of the B-50 bomber), which had similar long-range photoreconnaissance capability and was less expensive.