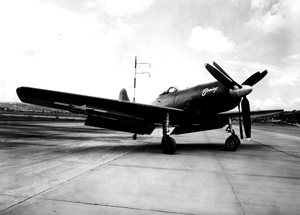 The XF8B-1 fighter-bomber was the heaviest carrier-based airplane built before the end of World War II. It was the first fighter Boeing built after the P-26 “Peashooter” of 1936 and the last before the FA-22 in 1990.

The XF8B-1 could be flown as a torpedo bomber and, because of its single-seat configuration, could also be used as a fighter. Because of its size and great horsepower, the XF8B-1 used an unusual dual six-blade contra-rotating propeller. It carried bombs internally and extra fuel externally, and its six machine guns were mounted inside the folding wings.

Only three XF8B-1s were built during 1944 and 1945. The aircraft never went into major production because changing wartime strategy required that Boeing concentrate on building land-based large bombers and transports.