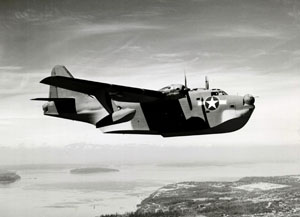 The Boeing XPBB-1 Sea Ranger, or the Model 344, built for the U.S. Navy, was an extremely long-range flying boat patrol bomber. It was the largest twin-engine airplane built up until the time of its first flight in 1942. It used a wing very similar to the four-engine B-29 bomber and incorporated aerodynamic features of the Boeing Model 314 Clipper.

The Navy ordered 57 Sea Rangers to be manufactured at a new plant it owned on 95 acres (38 hectares) on the south shore of Lake Washington in Renton, Wash. The waterfront site provided natural protection from prevailing winds, so it was easier to launch seaplanes directly from the plant.

The Sea Rangers were designed for a “boosted takeoff” by being catapulted from huge barges. Although the normal range of the aircraft was 4,245 miles (6831 kilometers), designers believed this distance could be doubled by the fuel-saving catapulted takeoff.

Before the first Sea Ranger was finished, American dive bombers had destroyed four Japanese aircraft carriers at the Battle of Midway, June 4, 1942. The U.S. military changed its strategy in favor of land-based bombers.

Only one Sea Ranger was built, nicknamed the “Lone Ranger.” The Boeing 25-year tradition of building seaplanes came to an end when the Lone Ranger flew out of Renton for the last time on Oct. 25, 1943, heading for the Navy base in San Diego, Calif. The one-of-a-kind seaplane served the Navy in a variety of ways for several years before it was placed in storage at the Norfolk Naval Air Station in Virginia.

The Navy traded the Renton site with the U.S. Army for a plant in Kansas City, Mo., and the Army took over the Renton plant, where Boeing workers subsequently produced 1,119 B-29 bombers. After the war, the Renton plant eventually became a manufacturing facility for Boeing commercial jet transports.