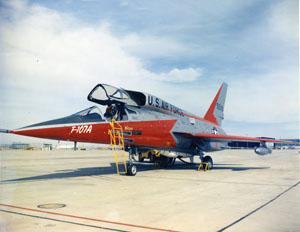 After the North American F-100 Super Sabre was in production, the design was reconfigured to meet U.S. Air Force requirements for a fighter-bomber capable of delivering a nuclear payload at Mach 2 speeds. The first versions were designated F-100B, but when the Air Force ordered prototypes, the designation changed to YF-107A (NA-212).

To permit installation of a fire control radar, the air intake was located behind the cockpit. The YF-107A flew Mach 2 in its first all-out test flights during 1957. It was the last fighter North American Aviation built for the Air Force.

The three YF-107As provided valuable data for advanced flight research. They were followed by the F-108 (NA-257) Rapier, which entered the design stage as a Mach 3 interceptor but was never produced.