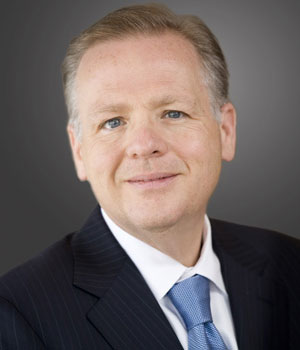 Boeing's Government Operations office is located in Arlington, Va., near Washington D.C., and serves the company in three ways:

The office works with public officials across all levels of government -- federal, state and local -- to carry out this mission. It also works with various third parties -- such as think tanks, trade associations, public policy groups, and international organizations. The Government Operations office strives to ensure the regulatory and political climate in the U.S. is conducive to global aerospace and defense leadership and supports long-term American manufacturing competitiveness and innovation. In addition to these many functions, the office serves as a point of contact between federal, state and local governments, plus associated third parties, and the company’s business units.

The Boeing Company – the world’s largest aerospace company and America’s largest exporter – assembles commercial airplanes and defense products and also builds aerospace components in the United States. Among Boeing’s 137,000 employees in all 50 states (as of January 2017) are more than 50,000 factory employees and more than 45,000 engineers.

Boeing’s market success plays a key role in supporting high-value aerospace jobs across its supply chain and across the United States. In 2016 alone, Boeing paid nearly $45 billion to more than 13,600 businesses, supporting an additional 1.3 million supplier-related jobs in the United States. These businesses include suppliers for our commercial and defense production, non-production vendors and subsidiaries of companies to which Boeing made other payments.

The U.S. Export-Import Bank, known as Ex-Im, is a government agency that helps American businesses compete in the global economy by offering loans and guarantees to foreign purchasers of U.S. manufactured goods who meet strict lending qualifications. Ex-Im helps Boeing customers around the world secure financing for the purchase of Boeing airplanes and satellites. Fifty-nine other governments have their own version of Ex-Im, including the three governments that finance Airbus sales (France, Germany and the United Kingdom). The Ex-Im Bank was reauthorized for a five-year period with broad, bipartisan support in December 2015, but the Bank still lacks a quorum to approve major transactions like aircraft financing. The Ex-Im Bank is critical to our ability to compete globally and to create and sustain more than 1.5 million U.S. jobs across Boeing and throughout our U.S. supply chain. There are four nominees to the Bank’s Board currently awaiting confirmation in the U.S. Senate. 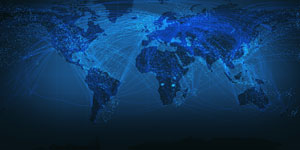 Boeing supports trade policies and agreements that create and sustain U.S. jobs – expanding opportunities for U.S. exports and leveling the playing field for American companies and workers. Fair trade is important to Boeing because what we sell around the world is mostly made here in the United States. Over 70 percent of commercial airplane revenue comes from foreign customers, while over 90 percent of our total workforce and 80 percent of our supply chain is based in the United States. 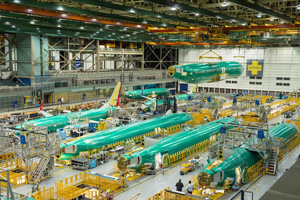 As the world’s largest aerospace company, The Boeing Company, and the United States aerospace sector in general, is rapidly growing to meet the worldwide demand for new commercial aircraft and aviation products. Since 2010, Boeing has increased production 56 percent to meet the strong demand for commercial airplanes. Delays in certification have significant financial impacts for both Boeing and our customers. A streamlined, risk-based certification process will enable U.S. aerospace companies to compete on a level playing field with foreign aerospace companies. 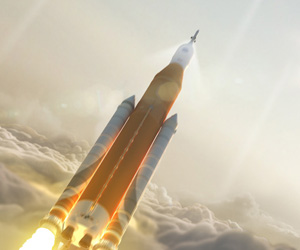 The Boeing Company has been a leading provider of human spaceflight systems and services for more than 50 years, celebrating lunar footsteps, space shuttle launches, and assembly of the International Space Station. The National Aeronautics and Space Administration today is fostering a commercial space industry and selected Boeing to build a crew transportation system capable of launching from the U.S. with crew and cargo. Boeing’s CST-100 Starliner system is preparing for its first test launch in 2018, and will soon offer future flight services to the International Space Station.

NASA also is using the world’s largest rocket and advanced launch vehicle, the Boeing-built Space Launch System, to power the Orion spacecraft beyond Earth’s orbit into deep space. Around the country, teams are working on a number of advancements in propulsion, materials, and new capabilities to enable deep space exploration. Boeing is working with NASA to keep the American path to Mars on track. We urge NASA and Congress to fully fund Space Exploration and preserve American leadership in space. 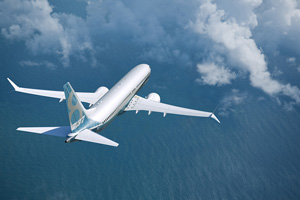 Boeing is fully committed to meeting the new carbon dioxide emissions standard announced by the International Civil Aviation Organization (ICAO). Environmental goals are aligned with our business goals, as our commercial customers continue to focus on greater fuel efficiency and lower emissions.

Over the years, we have made significant improvements to the efficiency and environmental performance of our products and our new commercial airplanes have been designed to not only meet but exceed challenging emission requirements. The 787 Dreamliner family reduces fuel use and carbon dioxide emissions by 20 to 25 percent compared to airplanes it replaces. The new 737 MAX, with first delivery expected in 2017, will reduce fuel use and emissions by 20 percent compared to the original Next-Generation 737. The 777X, with first delivery expected in 2020, will be the world's largest and most fuel-efficient twin-engine jet.

Furthermore, it is Boeing's practice and policy to prohibit outside organizations such as trade associations from using Boeing's funds for any election-related political expenditure. Boeing has requested and received written assurance of adherence to that policy by its largest trade associations. Boeing continues to communicate its policy to other groups with which it is associated, in order to prevent the use by such groups of Boeing's corporate funds for election-related political purposes. Moreover, Boeing regularly reviews each of its outside affiliations, including a review of any advocacy undertaken by such third-party groups, to ensure continued overall alignment with Boeing’s interests and business strategy. Any continued support for such organizations must be approved by the Executive Vice President, Government Operations, on at least an annual basis.

Boeing uses corporate resources in order to support Boeing’s viewpoint on important public policy issues, including expenditures for external entities who advocate on Boeing’s behalf. Any such advocacy requires the prior approval of Boeing’s Executive Vice President, Government Operations, is overseen and managed by Boeing’s Government Operations organization, and is conducted in accordance with applicable law, sound corporate practice, and our high standards of ethical conduct. Boeing files lobbying disclosure reports with the United States Congress, which are available here and here. Boeing files similar reports where required at the state level. Lobbying activities are defined and tracked internally. As outlined in the Company's internal procedure on Lobbying and Byrd Amendment Activities, Boeing complies with federal regulations as outlined in, but not limited to, the Lobbying Disclosure Act (LDA) and the Byrd Amendment. Data and reporting required by the Lobbying Disclosure Act (LDA) are disclosed and available publically on the LDA Report homepage. Training is provided to employees on these requirements as well as responsible behaviors. In addition, Boeing’s Executive Vice President, Government Operations, reports regularly to Boeing’s Board of Directors on the Company’s lobbying and other advocacy activities.

The political expenditures by The Boeing Company Political Action Committee (BPAC), a voluntary, nonpartisan political action committee established by The Boeing Company in accordance with federal law, are set forth here. BPAC is governed by an Advisory Committee comprised of Company executives and is funded solely from the voluntary personal contributions it receives from its members, who are employees of the Company eligible to be solicited for and to make contributions under federal election law. BPAC may direct contributions to the campaigns of candidates seeking federal offices, as well as selected state and local campaigns, ballot initiatives, and section 527 entities where such contributions are allowed. BPAC makes contributions under the supervision of the Executive Vice President, Government Operations in compliance with applicable laws and regulations. Authority to approve BPAC contributions has been delegated to the BPAC Treasurer (Vice President, National Strategy and Engagement). BPAC contributions are made without regard to party affiliation and solely on the basis of a candidate’s policy positions on business issues of importance to the aerospace industry and to the Company and its shareholders. The Executive Vice President, Government Operations, reviews BPAC’s budget and activity with the BPAC Advisory Committee semi-annually and with the Company's Board of Directors annually.