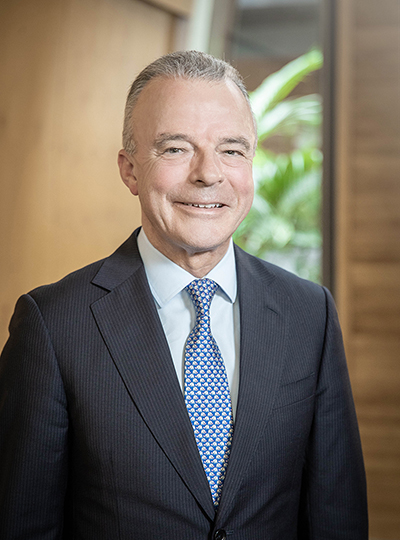 Dr Brendan Nelson is president of Boeing Australia, New Zealand and South Pacific. He is the senior company leader in the Oceania region and is the chairman of the board for Boeing Australia Holdings. In this role, Dr Nelson coordinates all Boeing activities, leads government relations and directs the implementation of Boeing’s strategy to expand its local presence and grow the business. Effective February 2020, Nelson is based in Sydney, Australia.

Prior to joining Boeing, Nelson served as director of the Australian War Memorial for 7 years. Prior to this, he was the Australian Ambassador to Belgium, Luxembourg, the European Union and NATO (2010–12). Apart from overseeing a major transformation in Australia’s relationships with the European Union and NATO, Dr Nelson forged deep links with the communities of Flanders, where almost 14,000 Australians lost their lives during the First World War.

Born in Coburg, Victoria, in 1958, Dr Nelson studied at Flinders University, South Australia, where he graduated with a Bachelor of Medicine and Surgery. He worked as a medical practitioner in Hobart from 1985 to 1995. In 1993 he was elected unopposed as National President of the Australian Medical Association (AMA), becoming the youngest person ever to hold this position. He had previously served as National Vice President, and Tasmanian Branch President, of the AMA. In 1995 Dr Nelson retired as president of the AMA following his preselection as the Liberal candidate for the Sydney seat of Bradfield.

Dr Nelson was elected to the Federal Parliament of Australia in March 1996. After the 2001 election, he was promoted from parliamentary secretary to the Minister for Defence to Cabinet in the senior portfolio of Minister for Education, Science and Training. Here he drove major reforms to universities and a focus on school standards and reporting. In 2006 he was appointed Minister for Defence when troops were deployed to Iraq, Afghanistan, East Timor and the Solomon Islands.

In November 2007 Dr Nelson was elected leader of the Liberal Party of Australia, serving as Leader of the Opposition until September 2008. The following year he retired from federal politics before taking up his ambassadorial appointment.

In 1995 Dr Nelson was awarded the AMA’s highest honour, the Gold Medal for “Distinguished Service to Medicine and Humanity”. In recognition of his commitment to public health, he was awarded an Honorary Fellowship of the Royal Australasian College of Physicians. He is the recipient of three honorary doctorates - in 2011 from the Flinders University of South Australia; the Australian National University in 2017 and the University of South Australia in 2019. He is a Fellow of the Royal Society of NSW (2017), Rotary Paul Harris Fellow and a Sydney University John Lowenthal Medalist.

Dr Nelson was appointed an Officer of the Order of Australia (AO) in January 2016 for his services to the community, the parliament of Australia, diplomacy and cultural leadership.

In 2018 the Returned and Services League (RSL) conferred Honorary Life Membership upon Dr Nelson for his services to and support of veterans and ex-service organisations. He was also awarded honorary citizenship of the Belgian city of Ypres in recognition of his support for the city, its commemorations and Last Post Association.

Dr Nelson is married and has three adult children; his interests include Australian military history, music, motorcycles, and tennis.