The site of the former Santa Susana Field Laboratory occupies a unique place in U.S. and California history. Santa Susana Mountains and surrounding Simi Valley in Ventura County provided land, wildlife, plants and trees to support Native American tribes who inhabited this region. The field lab's history is replete with tales of stagecoach trips and bandits, and it provided the backdrop to several movie and television shows from 1939 to 1996.

The Santa Susana Field Laboratory was operated for the federal government by various Boeing heritage companies, including North American Aviation, Rockwell International, Atomics International and Rocketdyne. NASA also had operations at the site beginning in 1973, when it acquired land from the U.S. Air Force. Boeing purchased Rockwell's aerospace and defense unit, acquiring the Santa Susana property in 1996.

The Space Age at Santa Susana

Rocket engine testing for the U.S. government began at the Santa Susana Field Laboratory in 1947 as America built its space program. The site, which spans 2,850 acres, features remote and rugged rock outcrops that form natural bowls that were deemed ideal for rocket testing.

In 1950, the first American-made large liquid rocket fuel engine was tested at Vertical Test Stand 1, the first of several towering stands erected at Santa Susana. Other milestones soon followed as the site supported virtually every major space program in U.S. history, including:

Over the course of nearly 60 years, 17,000 rocket engine tests were conducted at Santa Susana. 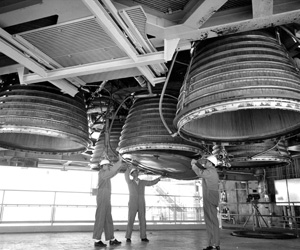 A Source of Nuclear Power

In 1953, the Santa Susana Field Laboratory also became a center of excellence for research, development and testing of nuclear energy, non-nuclear liquid metals and alternative energy sources, including solar.

Much of the work conducted on behalf of the U.S. Department of Energy at the Energy Technology Engineering Center, or ETEC, involved metallic sodium systems. This research on liquid metals technology was used to support the design and development of nuclear power throughout the U.S.

The Sodium Reactor Experiment was one of the first commercial nuclear power plants to provide electricity to the public, powering the city of Moorpark in 1957. The SRE experienced an accident in 1959 when overheating caused fuel damage in the reactor’s core. During the accident, primary power and cooling were maintained, coolant continued to circulate throughout the reactor core and the reactor vessel remained intact, preventing a meltdown. Following the accident, the SRE was repaired and operations continued, without incident, until the end of the project in 1964.

The System for Nuclear Auxiliary Power (SNAP) program was developed to test SNAP nuclear reactors in a simulated space environment. The SNAP10A was the first U.S. reactor to be placed into orbit when it was launched from Vandenberg Air Force Base in 1965.

ETEC also supported studies on advanced solar collectors for commercial electricity production, as well as the development of energy conversion processes designed to turn coal into liquid and gas fuels. 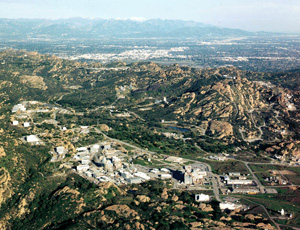 The U.S. Department of Energy’s ETEC was a center of excellence research, development and testing of nuclear, non-nuclear liquid metals and alternative energy sources, including solar.

From Research to Remediation, Restoration and Recovery

Testing and nuclear energy research have ceased at Santa Susana and Boeing is in the process of environmental management and closing the facility. Work continues with cleaning contaminated soil and groundwater contamination from its industrial past and transforming the site, through environmental cleanup, to an open space future. Past operations occurred on approximately one-fifth of the site, while the rest of the property remains as undeveloped landscape.

Solvents containing volatile organic compounds were used until the 1990s to clean rocket engine test equipment and ensure the safety of workers. Following approved practices at the time, these solvents were often disposed onsite, seeping into soil and groundwater. Low-level radioactive contamination resulting from energy research operations remains in soil on about one percent of the property.

An investigation of the environmental impacts from the site’s historical operations and interim cleanup efforts, including contaminated soil removal, have been ongoing since 1984. Boeing is focused on completing environmental rehabilitation, restoration and recovery through a thorough site assessment, investigation and comprehensive cleanup that protects the health of the surrounding community, while preserving environmental sustainability and the site’s cultural and natural resources for future generations.