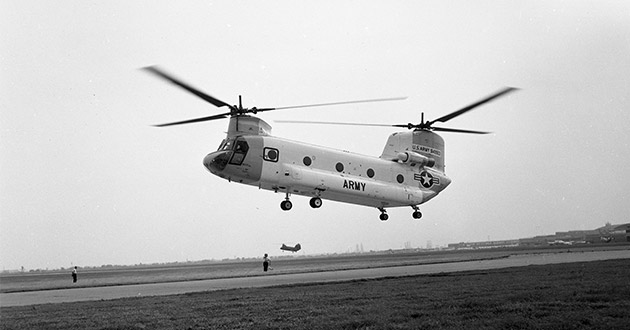 Chinook’s prototype, the YCH-1B, takes its first flight in 1961.

This month marks 60 years since the Chinook prototype took to the skies, setting the stage for the rotorcraft’s eventual dominance in heavy-lift heroics.

Whether flown in harsh combat conditions, transporting loads of cargo and troops, or conducting humanitarian missions, the Chinook has made a career of doing the unthinkable. So it’s fitting that the helicopter’s extraordinary 60 years appear to be merely a warm-up act.

“There’s no doubt in my mind that Chinook will be at least a 100-year-old aircraft,” said Patrick Serfass, Boeing Global Sales and Marketing representative for Vertical Lift. “It will be operating and performing for the United States and its allies well beyond 2060.”

That would not have been possible without the incremental improvements – large and small – Team Chinook has worked into the aircraft over its six decades. Today H-47s are known for their strength and durability, but that wasn’t the case earlier in the Chinook’s lifetime.

Retired pilot Herman Richardson, who flew Chinooks for the U.S. Army and later worked at Boeing, recalls when Chinooks had only a fraction of their current power. Looking back at his service during the Vietnam War era, Richardson said, “We couldn’t fly them the way we do now.”

Over his career, Richardson had a front-row seat for the Chinook’s evolution. He flew all versions of the Chinook as it progressed from models A through G, and he witnessed the rotorcraft’s power become its greatest attribute. “It was a joy ever since,” he said. “There’s not a better aircraft to fly than Chinook.”

Richardson, as well as a number of other individuals closely associated with Chinook, visited Boeing’s H-47 production facility in Philadelphia on the 60th anniversary of the aircraft’s first flight. While there, they shared memories and insights with Boeing and industry teammates who develop, build and support today’s Chinooks.

One of those guests, Fred Piasecki, chief technology officer of Philadelphia-based Piasecki Aircraft Corp., explained why Chinook continues to be a best-in-class platform.

“The longevity of this product is due to a dedication to engineering and manufacturing excellence,” said Piasecki, whose father, Frank, pioneered the tandem-rotor technology that is Chinook’s hallmark.

“The aircraft was an immature vehicle when it first went to flight,” Piasecki continued. “Field feedback was a cornerstone of early improvements. It was the dedication of the people that made it a success.” 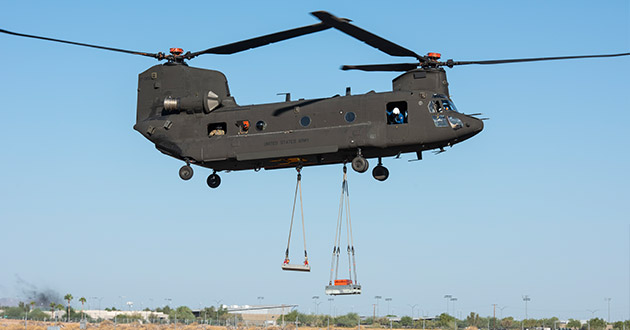 Today’s Chinooks, pictured here in the Block II configuration, may share a similar shape with earlier models, but Chinook’s capabilities have grown exponentially with each passing decade.

When asked how his father, who died in 2008, would feel about seeing the 60th year of Chinook flight, Piasecki responded, “I’m sure he would be happy his ‘DNA’ has advanced in the Chinook, but his focus was always on novel improvement. So kudos to the people of Boeing for their dedication to building and maintaining a superior product.”

One thing that hasn’t changed from generation to generation is the distinct look of the Chinook. The instantly recognizable Chinook shape can be a bit misleading, according to Heather McBryan, Boeing director of Global Sales and Marketing for Cargo Utility and Future Vertical Lift.

“While the exterior of the A model looks roughly the same as today’s models, the interior – the stuff you can’t immediately see – is in no way similar,” said McBryan, who has spent the majority of her career working in Chinook program management, engineering and now sales. “We have made a ton of upgrades, increasing payload, improving maximum gross weight and adding a digital cockpit. Today we’re continuing to use operator feedback to improve the Chinook’s performance and maintainability so that it is relevant for decades to come.”

As part of the Block II program, currently in the engineering, manufacturing and development phase, Boeing is laying the foundation for the next era of Chinook. The U.S. Army’s fleet will be equipped with advanced rotor blades; a lighter, stronger airframe; greater fuel capacity; and more efficient electricity management. The upgrades will extend aircraft range and improve payload capacity and maintainability, as well as position the Chinook to operate in multiple domains and easily receive future upgrades.

The key to the helicopter’s continuing dominance, McBryan emphasized, is the Chinook team’s hunger for continuous improvement and its day-to-day customer-first mindset.

“This is one of the most dedicated groups of people when it comes to supporting the customer,” she said. “From engineering to operations and quality, they are always considering the end result for the user and making decisions based on that.

“Nothing inspires us like knowing we are bringing our best to the warfighter and all who depend upon the first-time quality of the Chinook.” 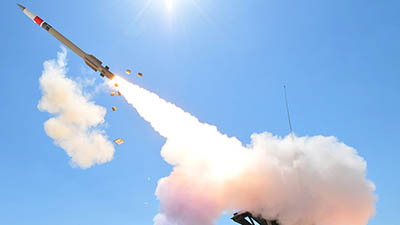