Knowing what is happening on and under the seas – and being able to respond accordingly – is critical to national, economic and human security in the Asia-Pacific. However, the region’s unique geographic features can make that a daunting mission.

First, consider the staggering size of the Asia-Pacific. More than 8,000 kilometers (5,000 miles) separate Tokyo and Sydney, and Indonesia alone spans more than 4,800 kilometers (3,000 miles) from its eastern to western boundaries. Second, the volume of the Asia-Pacific maritime domain greatly exceeds that of its land domain. With thousands of miles of coastline and expansive ocean territories to survey and traverse, countries in the Asia-Pacific need their maritime surveillance systems to have four core features.

Sean Liedman, director of Mobility and Surveillance Business Development for Boeing, explained from the Singapore Airshow that those four keys are range, speed, persistence and multimission capabilities.

In light of the vast distances in the Asia-Pacific, time is of the essence, particularly for patrol, reconnaissance and early warning aircraft.

“The combination of long range and high speed leads to earlier and more distant detections of maritime and undersea contacts of interest,” said Liedman, a retired U.S. Navy captain who piloted the P-8A Poseidon and its predecessor, the P-3C Orion. “Ultimately that gives decision makers more time to select a course of action, whether addressing an approaching threat or responding to a humanitarian crisis.”

A platform such as the P-8, a maritime surveillance and anti-submarine warfare (ASW) aircraft, brings tremendous advantages in covering large geographic areas. With a mission radius of more than 2,225 kilometers (1,200 nautical miles) and speeds up to 490 knots (907 kph / 564 mph), the P-8 excels not only at surveying large areas but also responding quickly and with pinpoint accuracy. It provides a 30% faster transit speed than any other aircraft in its class, which leads to a reduced area of probability when searching for contacts of interest.

Those features make the difference when every moment matters. Just last year a Royal Australian Air Force (RAAF) P-8 came to the rescue of a fishing crew stranded on a capsized boat. The P-8’s ability to fly at low altitudes allowed the crew to drop life rafts, saving 20 sailors and allowing time for another vessel to retrieve them.

Take, for instance, a P-8. The aircraft is designed to fly, with its maximum payload, 2,200 kilometers (1,200 nautical miles) from base; stay on station for four hours; and return home. A sortie like that could last more than 10 hours from start to finish. With aerial refueling, a P-8 sortie length can be extended up to 24 hours, widening the territory the P-8 can cover and reducing the number of aircraft needed for the mission. 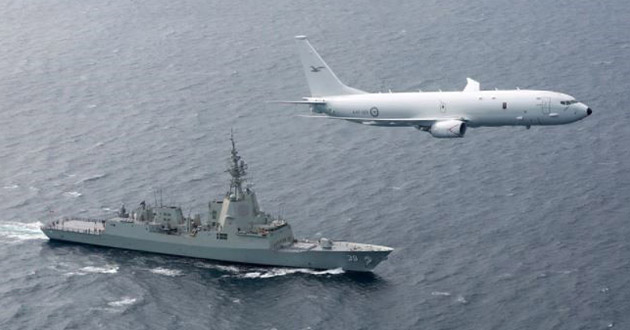 Once an aircraft or vehicle has transited to its operating station, the attribute of persistence extends the window of time to deliver its effects – for example, surveillance or precision strike. A family of systems, including both crewed and uncrewed assets, can deliver unparalleled persistence, allowing warfighters to see, listen and reach farther than ever before.

Boeing’s portfolio of uncrewed products includes a number of proven, low-risk and affordable systems that complement crewed aircraft in providing persistent intelligence, surveillance and reconnaissance (ISR) capabilities for land and sea.  A number of countries in the Asia-Pacific already rely on those platforms to meet their maritime reconnaissance requirements. 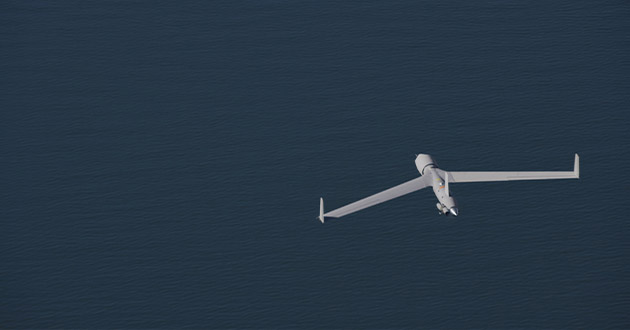 Singapore, Australia, Malaysia and the Philippines are some of the existing customers for Insitu’s uncrewed aircraft systems, the ScanEagle and Integrator, products of Australia-based Boeing subsidiary Insitu Pacific. These long-endurance uncrewed aircraft can provide 24 hours or more of the highest-quality intelligence over land or sea, according to Andrew Duggan, Insitu Pacific’s managing director. Duggan explained: “Our family of air vehicles carries a range of electronic and optical sensor payloads that provide 24/7 coverage. The intelligence they deliver provides a vital trip wire, enabling other assets to respond.”

Boeing is in the process of delivering ScanEagle and Integrator to additional customers in the Asia-Pacific and is responding to regional countries looking to expand their maritime domain capabilities. ScanEagle operators benefit from best-in-class reliability, backed by more than 1.3 million flight-hours.

With ScanEagle and Integrator delivering critical information from the sky day and night, another platform provides persistent surveillance from the water. The Wave Glider, a product of Boeing subsidiary Liquid Robotics, is an autonomous surface vehicle in use by Japan, South Korea, Australia and the Philippines. Positioned on the ocean surface, the Wave Glider uses acoustic sensors to collect and communicate data in real time between crewed and uncrewed systems from seabed to space. Powered by wave and solar energies, the vehicle requires no fuel, enabling it to stay on mission 24/7 for several months at a time.

The persistent maritime and land surveillance that uncrewed and crewed systems can offer is a key enabler, particularly as Asian-Pacific countries focus on maximizing resources. 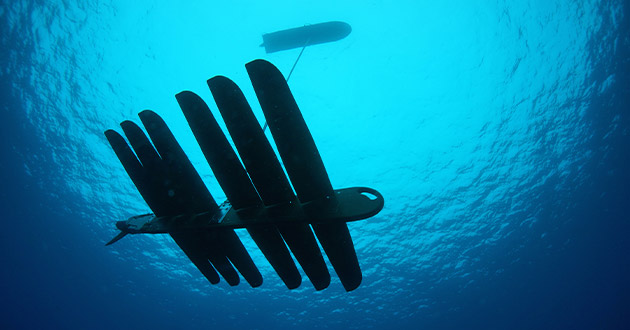 The Wave Glider, a low-profile mobile sensor platform that sits atop the ocean, uses acoustic sensors to collect and communicate data in real-time between crewed and uncrewed systems from the seabed to space. The system can stay on mission 24/7 for several months at a time.

The fourth key attribute in this region for maritime awareness and security is multimission capabilities.

“Given the multidomain threat environment – air, land and maritime – and the pressures on defense spending from COVID-19 economic recovery demands, it only makes sense to acquire platforms that get the most capability for the money,” Liedman said. “The best platform is the one that provides the optimum mix of multimission capability and affordable total ownership costs.”

The P-8 offers a powerful mix of proven capability and affordability throughout the aircraft life cycle. The more than 140 P-8s in service with customers around the globe have amassed more than 400,000 flight-hours, performing a broad range of missions. The P-8 offers ASW capabilities not seen in any other maritime patrol aircraft. It can carry 129 internally stored sonobuoys to track submarines, as well as thousands of pounds of ordnance and weapons, including Harpoon missiles and torpedoes. In addition to ASW, the P-8 conducts anti-surface warfare, overland reconnaissance, humanitarian assistance and disaster-relief operations, and search-and-rescue operations.

On the affordability front, customers who acquire P-8 leverage US$7 billion of investment by the launch customers, the U.S. Navy and the RAAF. In addition, the P-8 industry team has continued to drive down aircraft costs since low-rate initial production and has implemented a comprehensive sustainment model, proven to help customers make the most of their investment and resources. For example, the P-8 training system is meeting increasing customer demand for realistic, concurrent and affordable training. Boeing provides a high-fidelity learning experience – through courseware, classrooms and simulators – offering pilots, air crews and maintainers a seamless transition to the aircraft.

In addition to large aircraft such as P-8, smaller systems also deliver impressive multimission capability. Boeing offerings provide a considerable range of flexibility. Integrator, for example, has multiple payload spaces that can be customized with cameras, communications capabilities and other advanced mission-specific technologies to suit operational needs. The latest version of Integrator, designated Integrator ER for “Extended Range,” features plug-and-play payload capabilities such as Alticam 14 and Short-Wave Infrared for enhanced imagery and targeting support, beyond-line-of-sight communications via satellite, and up to 556 kilometers (300 nautical miles) of range at 14.4 hours on target. 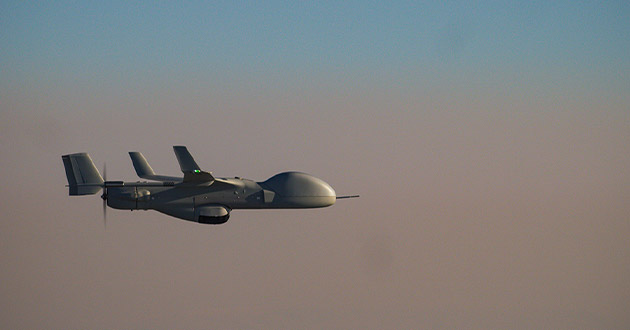 Likewise, the expeditionary ScanEagle enables field-swappable payloads that can be reconfigured rapidly for electronic warfare, ISR, communications relay, overwatch and targeting. Both ScanEagle and Integrator are agile and expeditionary so the operator’s footprint stays small, no matter how big the mission.

Boeing’s investment in and development of the Airpower Teaming System (ATS) is driving further capability for airborne missions. The modular and flexible nature of this Australian-designed uncrewed aircraft allows it to be missionized to meet country-specific needs. With fighterlike performance, the ATS is designed to team with existing crewed and uncrewed assets, using artificial intelligence, to complement mission capabilities. 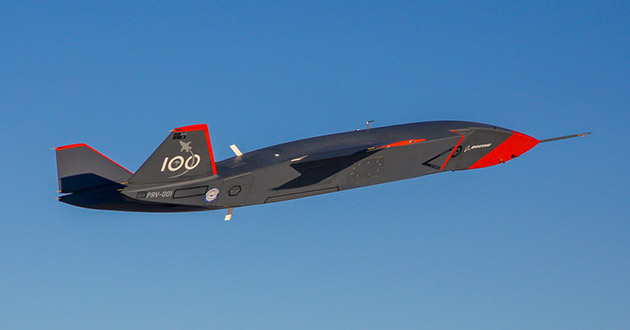 The modular and flexible nature of the Airpower Teaming System, a new Australian-designed uncrewed aircraft, gives global customers control over the most important part of the aircraft – the missionization – which includes the systems, sensors and software that give it operational capability.