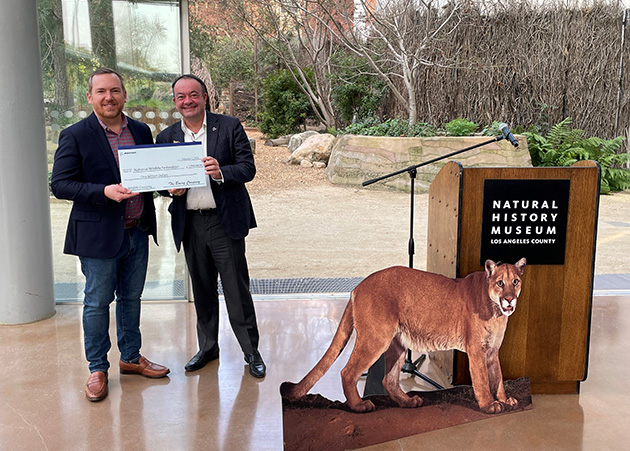 As part of Boeing’s commitment to sustainability as a company value — with a focus on environmental stewardship — company officials announced Feb. 1 a $1 million donation to the National Wildlife Federation for the Wallis Annenberg Wildlife Crossing in Los Angeles.

The crossing, expected to break ground this year, will span 10 lanes of U.S. Highway 101 in Los Angeles to reconnect an integral wildlife zone near Boeing’s Santa Susana Field Laboratory.

Ziad Ojakli, Boeing executive vice president, Government Operations, made the announcement Tuesday at the Natural History Museum of Los Angeles, near the exhibit featuring the famed mountain lion, known as P-22, who survived crossing two major local freeways. The wildlife crossing, which will be one of the largest of its kind in the world, will be critical to saving the threatened local population of mountain lions from extinction.

“We are pleased to make this contribution to this historic crossing, and are committed to environmental protection and stewardship at all levels, including urban conservation efforts that are often overlooked,” Ojakli said. “This investment demonstrates our ongoing commitment to preserving the unique wild heritage and biodiversity of the area, including the Santa Susana site.”

“We thank Boeing for their long-term partnership and support in helping to make this project a reality, as well as their donations to our important community-based work, like Wildlife 2 Watts and building schoolyard habitats,” said Dirk Sellers, Chief Development Officer, National Wildlife Federation.

Boeing has a history of partnership with National Wildlife Federation, including donations for the wildlife crossing campaign, the long-term mountain lion study in the Santa Monica Mountains, and education outreach efforts that allow students to connect with nature, document the wildlife species that visit their school, and learn about the natural world in an authentic way. Since 2017, Boeing has provided more than $5.8 million to environmental organizations across California.