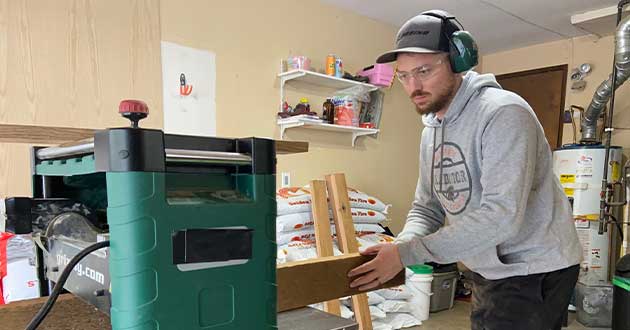 Kyle Jenson’s experience woodworking has taught him valuable lessons he brings with him to his role on the Ground-based Midcourse Defense (GMD) program.

Lesson #1: Focus on the details

If Kyle Jenson has learned one thing from years of woodworking, it’s that to solve a problem, first you have to see it. Having produced custom-built furniture since he was a teenager, the Boeing engineer knows the importance of getting every last detail correct.

“I’m my own worst critic,” Jenson said. “When I’m inspecting one of my pieces, I see flaws no one else can see, but I still have to fix them.”

Jenson brings that same zest to his role on the Ground-based Midcourse Defense (GMD) program. As a quality engineer, he works closely with Boeing teammates, customers and supplier partners to keep production and engineering efforts in sync with each other and aligned with requirements. While his goal is to ensure compliance, Jenson is just as interested in people as in processes.

“It’s really important to me to be a human being first, to create good relationships and build trust,” Jenson said. “I have a fix-it-and-make-it-right mindset rather than a ‘gotcha’ mentality, because at the end of the day, quality is what matters most to me and to the warfighter.”

Jenson comes from a military family. His father, grandfather, great-grandfather and great-great-grandfather all served in the United States armed forces. While Jenson chose a different career path, he feels that bringing his best every day to homeland missile defense is his way of giving back to his country.

“There’s no more powerful reminder of that duty than being face-to-face with our customer,” Jenson said. “When you’re with the people in uniform, you really feel the importance of what you do each day and how you do it.”

Jenson takes the “what” of his job as seriously as the “how,” and it pleases him to see the results. When he visits suppliers, it’s not uncommon for people to spot him and immediately come forward to problem-solve. He knows he can count on his supplier partners to do the same for him, and he considers that a hard-earned honor.

“Being open and honest with others encourages them to do the same with me so that together we can prevent even minor issues from becoming bigger problems,” Jenson explained. “We’re encouraged at Boeing to have a voice and raise issues. I’ve seen for myself that transparency is huge.”

Lesson #3: Learn from the expertise of others

Grateful for the wealth of knowledge and resources available to him, Jenson relies on the expertise of fellow GMD teammates who have supported the program for their entire careers. One of his closest advisers is a Boeing senior quality engineer who has been with Boeing for more than two decades and whose father was an engineer on the Apollo program.

“There are folks who know this program better than anyone else, and that’s important because they help educate the rest of us,” he said.

Jenson first came to appreciate the value of mentoring when he was in high school. His shop teacher had an “amazing” impact, stoking Jenson’s interest in woodworking and showing him how to make his products square, level and solid.

After high school, Jenson continued woodworking as a hobby, but he left the town in Idaho where he was raised to join the aerospace industry. Eventually he took a job with Boeing and, with company funding, finished his degree in mechanical engineering.

Today he continues to build cabinets and furniture, but he has come a long way since producing his first piece — a table that his grandmother still uses. He recently built a king-sized bed for himself and his wife, and the many woodworking products he has in his home must withstand durability tests from his 4- and 5-year-old children.

He enjoys his job and the “lots of opportunities” it affords him. Whether traveling across the country, interacting with customers or connecting with mentors, he appreciates the growth that comes with each encounter.

“You can have all the degrees in the world, but it doesn’t mean a whole lot without experienced people to teach and guide you,” Jenson said. “The key is finding someone who will challenge you but not do the work for you. They have to be willing to let you make mistakes.”

After all, in Jenson’s eyes, a mistake isn’t an end but a journey to something better.