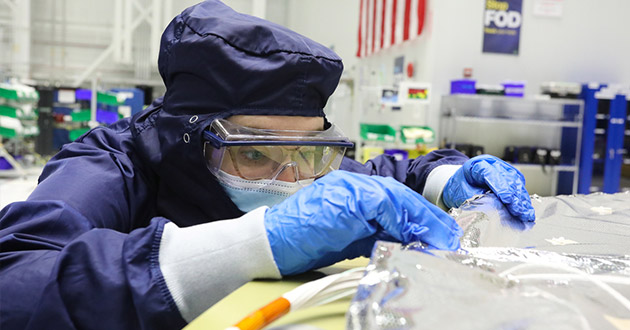 While spending part of her youth on a military base in the Marshall Islands in the Pacific Ocean, whether at the beach, in the yard or on her dad’s boat, Amy Comeau often looked at the sky.

Her parents at the time worked on a missile test range on the north side of the Kwajalein Atoll.

“There were just the clearest skies you could fathom every night,” said Comeau, now a project engineer for the CST-100 Starliner program. “I remember looking up at the night sky, being fascinated with what was up there, and I knew I wanted to go there some day.”

While she hasn’t given up on her dream of one day being an astronaut, she works daily on the spacecraft that will send astronauts to the International Space Station.

“I love adventure and I think the benefits of people living and working off our planet are immeasurable,” she said. “We’ve done so much research and contributed all types of technology that helps us solve problems that we have on Earth. I would hope that one day if I become an astronaut, I can continue that legacy.”

With an engineer mom employed at another aerospace company and a machinist dad, Comeau was inspired to pursue a technical field from the start. She would go to her mom’s job during Take Your Child to Work Day to learn about different kinds of engineering and their real-world impacts. Her mom has spent most of career in missile defense systems working all over the world.

“I like seeing how engineering fits into the broader strategy or mission,” Comeau said. “My mom has been this guiding light for me. Her real-world experience in engineering really helped me understand what the industry is like and what jobs and opportunities are available. She’s a very hard worker and loves what she does. Seeing that through my formative years, and even now, it’s very easy to look up to someone like that. She keeps me going.” 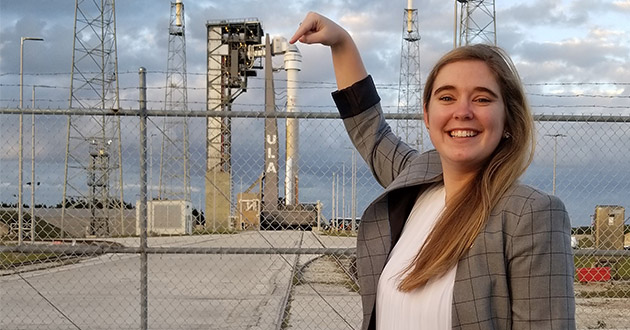 Amy Comeau enjoys a view of the Starliner atop an Atlas V rocket at the launch pad the day before the first Orbital Flight Test in December 2019.

Her dad was also an influence, sponsoring robotics teams in high school and teaching her about designs.

“He was invaluable in providing that practical understanding of how parts are made, of smart decisions when designing something, and how it’s going to be built or implemented,” she said.

Her parents always knew she would go into the space field. From the time Amy was a toddler, her mom, Denise, said her daughter would tell anyone who would listen that she wanted to be an astronaut — and has not wavered in her love of space.

“Her passion and drive for space exploration propels her in all that she does and her enthusiasm is absolutely contagious,” Denise Comeau said. “As an engineer myself and avid STEM (science, technology, engineering and math) volunteer and supporter, I certainly exposed Amy to many STEM-related activities throughout her childhood. But it was her own passion, curiosity, teaming and leadership skills, along with a significant dose of risk-taking, that have been part of her creating her path. As a parent, there is no better feeling in the world to see your child living their dreams.”

On the Starliner program, Amy Comeau works for the Chief Engineer’s Office on projects pertaining to complex system-level design and integration, including certification and analysis. Her roles also include leading multiple qualification efforts of various flight hardware for the Starliner and serving as test director for ordnance testing related to various components that jettison during flight.

She previously worked in El Segundo, California, on the satellites program, conducting weekly status reports to programs on the progress of the power rack upgrades and supporting setup and functional checkouts of satellite payloads.

Starliner leaders describe Comeau as the “go to” person and a great integrator.

“She is always collaborating while driving the team to move forward. That skill set enables her to bring teams together to ultimately solve hard problems in a timely manner,” said Alex Pest, Starliner chief engineer for the second Orbital Flight Test (OFT-2). “Her main strength in these efforts has been in her ability to collect and manage the data and communicating that to leadership for decisions to be made.”

Comeau, who has a bachelor’s in aeronautical and astronautical engineering from Purdue University, also enjoys inspiring middle school, high school and college students as well as educators. She is a Brooke Owens Fellow. Created to honor the legacy of space industry pioneer and accomplished pilot Dawn Brooke Owens, the Brooke Owens Fellowship provides paid internships and executive mentorship for exceptional undergraduate women and gender-minority students pursuing careers in the aerospace industry.

“The Brooke Owens Fellowship gave me experiences beyond anything I could have hoped for and laid the groundwork for my current successes,” Comeau said. “The program is near and dear to my heart. I’m extremely passionate about STEM outreach and getting young girls involved in STEM.”

She has volunteered at multiple outreach events in her hometown near Boston. She has also provided input to the school board there on how to ensure that STEM programs are successful. While at Purdue, she was involved in career days for high school students. She has also helped with high school FIRST Robotics teams.

“We have to continue to show young girls how cool STEM is and encourage them to find projects and groups of people who can help continue to foster that creativity,” she said. “I was lucky that I had my mom in engineering. She always encouraged me to pursue my passion. I was fortunate to have a direct role model.”