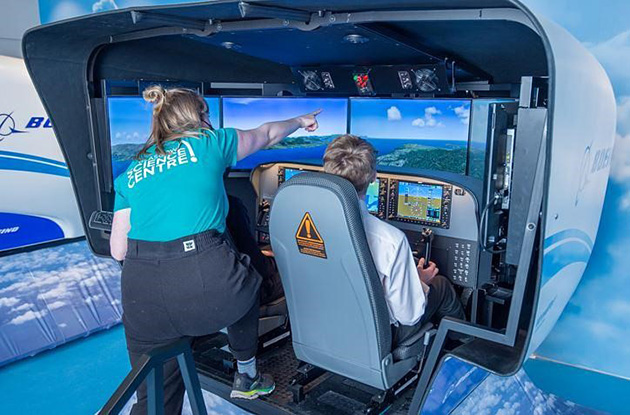 A flight simulator at the Newton Flight Academy in Glasgow

A Boeing-backed flight academy – the first of its kind in the United Kingdom – has opened in Scotland to inspire the engineers and scientists of tomorrow.

The opening is the latest milestone resulting from a $5 million (£3.8 million) investment from Boeing in 2018 to create a Newton network with its partner, FIRST Scandinavia. Thousands of students have benefited from STEM lessons and aviation experiences across Europe because of the Boeing grant.

Speaking at the opening in Glasgow, Scotland’s First Minister, Nicola Sturgeon, said: “It is going to be so powerful in enthusing young people, boys and importantly girls, in science and learning about aviation. It’s very much a key part of what we’re trying to do around building key skills for the future.”

The University of Strathclyde is a partner on the Glasgow Science Centre academy, which will also cover topics such as space, biofuels, advanced materials and manufacturing.

“The Newton Flight Academy at Glasgow Science Centre is another sign of Boeing’s investment and growing presence in Scotland, which is made possible by such tremendous partners,” said Sir Martin Donnelly, president of Boeing Europe and managing director of Boeing in the UK and Ireland. “The academy will play a key role in inspiring the future engineers and scientists who will help bring about a more sustainable future in Scotland and beyond.”

In 2020, Boeing and Scottish Enterprise created the Boeing Scotland Alliance, which explores opportunities to work together in Scotland, with the aim of doubling Boeing’s supply chain and creating 200 new quality jobs in five years. The alliance’s first initiative is a new $15.3 million (£11.8 million) R&D program with the National Manufacturing Institute Scotland that is exploring novel manufacturing technologies for metallic components in a facility next to Glasgow Airport.

Nine Boeing P-8A Poseidon maritime patrol aircraft fly from RAF Lossiemouth in Moray, where they are housed in a Boeing-built facility, and where around 200 Boeing employees will be based working alongside the RAF on maintenance, training and support of the fleet.

Boeing also has invested in Scottish startups through the first two cohorts of its UK-based accelerator.