In May 2022, Boeing delivered the 59th KC-46A Pegasus tanker to the U.S. Air Force. As the KC-46 takes on a growing role in the fleet, the Air Force has been putting the Pegasus to work in real-world, theater operational missions and global exercises. These missions are proving out the next-generation capabilities that the multi-mission KC-46 brings to the battlespace.

For seven weeks in March and April, four KC-46A tankers – deployed to Morón Air Base, Spain – participated in a series of Employment Concept Exercises, designed to enhance operational fielding and sustainment of the KC-46. With the KC-46 now approved for air-to-air refueling of 85% of receiver aircraft in the joint fleet — including 5th generation stealth fighters — the exercises are the Air Force’s next step to operationalize the KC-46 across a spectrum of mission scenarios.

The European exercise culminated with a significant milestone for the interoperability of the joint and allied fleet, as the U.S. Air Force KC-46A refueled an international receiver aircraft for the first time. 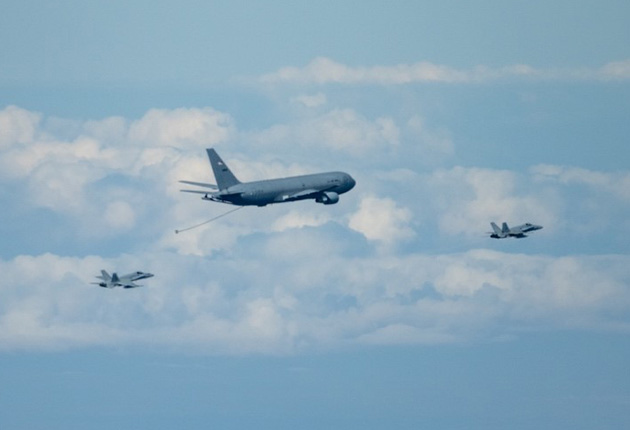 The European Employment Concept Exercise was only the latest in a series of global missions that are proving out the KC-46’s readiness. In February, the KC-46 made its debut at Cope North, an annual exercise of U.S., Australian and Japanese forces. The aircraft showed what it can accomplish for joint forces, particularly in covert and austere environments. The KC-46 can operate quickly and effectively at smaller, forward airfields, which often have shorter, narrower runways; little ramp space; and fewer on-the-ground resources.

“We are landing at austere locations with the world’s newest tanker aircraft and applying dispersal techniques that will have strategic impact,” said Capt. Jack Rush, 344th Air Refueling Squadron, in a U.S. Air Force publication in February. “The KC-46 may be in its Initial Operational Test and Evaluation process, but you would think otherwise watching yesterday’s Special Refueling Operations at an austere field.”

By accessing forward, austere environments – and taking up less space on the ground – the KC-46 enables dispersed basing for the warfighter and more air-to-air refueling booms in the air where they are needed throughout the operational theater.

Staying ahead of the threat

When there is the threat of severe weather or an inbound attack, tankers and bombers need to scramble in the shortest and safest time possible. Earlier this year, the U.S. Air Force put the KC-46A Pegasus to the test, conducting the aircraft’s first-ever KC-46 minimal interval takeoff. In a matter of seconds, three KC-46s from the 344th Air Refueling Squadron and 22nd Operations Group cleared the runway at McConnell Air Force Base, Kan.

A minimum interval takeoff – better known as a MITO – is a long-standing Air Force technique for getting aircraft into the air quickly. The MITO exercise demonstrated the KC-46A’s rapid response capabilities, crucial for medium- and high-threat level alert missions, known respectively as Bravo and Charlie missions.

READY TO GO: At left, a KC-46A Pegasus takes off while another prepares to do the same as part of a minimum interval takeoff exercise earlier this year at McConnell Air Force Base, Kan. At right, three KC-46A tankers ascend after takeoff, as part of the McConnell exercise. Shortening the time between takeoffs ensures pilots and crews are ready to execute their mission in any condition. (U.S. Air Force photos)

“MITO is a crucial and portable capability for a combat aircraft like the KC-46,” said Col. Nate Vogel, 22d Air Refueling Wing Commander, in an Air Force publication. “Our 22 ARW crews put together a risk-mitigation plan, and then executed the first ever MITO takeoffs in the KC-46. That is bold aviation....I couldn’t be prouder of the team.”

The multi-mission KC-46A advances all facets of global mobility, including cargo, passenger and aeromedical patient transportation. In February and March, the KC-46 participated – for the first time – in the U.S. Transportation Command’s Exercise Ultimate Caduceus, an annual field training exercise focused on global patient transport. The KC-46, which can hold about 30 percent more aeromedical evaluation patients than the KC-135 Stratotanker, simulated the movement of patients from international locations to care centers in the United States.

MULTI-MISSION TANKER: The KC-46 is showing that one of its multiple capabilities – aeromedical evaluation – can ensure time-sensitive and mission-critical patient care and transport. At left: During an exercise in January at Joint Base San Antonio, Texas, a medical team waits to unload medical equipment and supplies off a KC-46 Pegasus. At right: Medical professionals prepare to transport simulated patients off a KC-46 Pegasus. (U.S. Air Force photos)

Connecting joint forces with data at the tactical edge

Today’s tanker needs to deliver more than fuel to the battlespace. Data is also crucial for the modern warfighter – and the KC-46A Pegasus is one of the Air Force’s newest tools in the battle for information superiority.

The KC-46’s systems provide unmatched data through connections to more extensive Department of Defense networks as well as the tanker’s own tactical situational awareness suite. Those links allow aircraft without those capabilities to get on-the-spot mission updates from commands that drive the mission.

The KC-46’s connectivity makes it a critical asset for interoperability but also a target for adversaries to disable or degrade. Air Force Mission Defense Teams, which protect systems such as the KC-46A, typically function in main operating base environments. However, assets that can employ across the globe, such as the Pegasus, present a dynamic challenge. 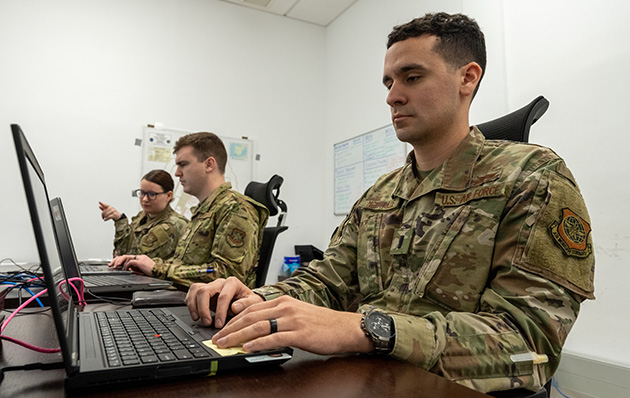 During the KC-46’s deployment in the European Employment Concept Exercise, a team from McConnell Air Force Base, Kan., completed the first off-station Mission Defense Team mission in Air Force history. The exercise showed the situational awareness the Pegasus can provide multi-domain warfighting is secure, while also proving to Air Force leadership that the KC-46A is confidently employable in combat operations.

The appearance of U.S. Department of Defense (DoD) visual information does not imply or constitute DoD endorsement.