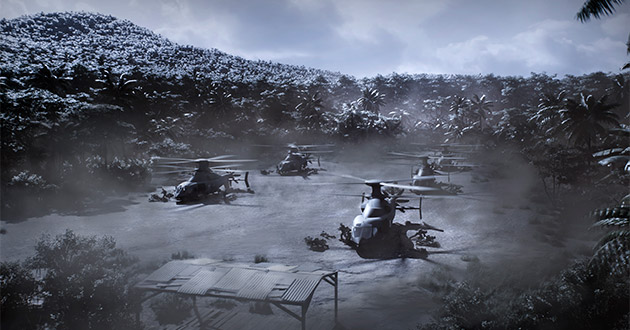 The wars of tomorrow are won with the innovations of today. DEFIANT X ®, an advanced air assault weapon system and utility helicopter, is the aircraft of the future. Flying low, traveling at high speeds, landing quickly and delivering soldiers to their destination—all while out-maneuvering the enemy—makes this aircraft critical across multiple domains. With its revolutionary design, DEFIANT X ® balances capability, speed and range without sacrificing the inherent utility and vertical lift maneuver of a helicopter. It will deliver reliable and cost-effective capabilities, beyond current knowledge and understanding, well into the future.

During air assaults, soldiers must find the best route and landing zone (also known as the ‘X’) to accomplish the mission at the objective. High agility throughout the entire mission profile is essential to return the aircraft—and the soldiers they carry—safely home. DEFIANT X ® enables safer operations with fly-by-wire controls, rigid main rotor and hover power in complex, low altitude environments. Its design enables instantaneous altitude changes and rapid acceleration and deceleration. Achieving 247 knots in level flight and 50 knots in sideward flight, the aircraft’s maneuverability and agility is tested and proven.

Designed with survivability in mind, DEFIANT X ® boasts single-engine flight capabilities as well as the ability to sustain current helicopter speeds even if the propulsor is lost in combat. The aircraft also adds power to the propeller and main rotor to rapidly accelerate and decelerate without changing pitch attitude. And, the aircraft has a rigid rotor system that allows the execution of turns in half the time of traditional helicopters, enabling fast evasion of threats.

As the Army modernizes across all disciplines, they will need to do so efficiently to meet their objectives. DEFIANT X ® is grounded in existing tactics, techniques and procedures. It fits in the existing BLACK HAWK footprint and requires no change to Army doctrine, which greatly reduces costs. Combined with a design approach focused on reliability and maintainability, DEFIANT X ® was built to lower total ownership costs over its life cycle.

The aircraft of the future are versatile and able to meet a variety of needs and missions. DEFIANT X ® offers superior capability. With a flexible, agile, advanced solution built on a digital design, the aircraft adapts easily to include different missions—like MEDEVAC, SOCOM, resupply and logistics and troop movement—software and systems for future growth across multiple missions. By using proven technology in the design combined with digital engineering and a modular open systems approach, the aircraft is easily scalable and adds utility at a lower cost and with minimal risk.

Together, Boeing and Sikorsky and have built 90% of the U.S. Army’s current military rotorcraft and have totaled more than 15 million flight hours. As the team that brought forward iconic military rotorcraft including Chinook, Apache and Black Hawk, the team’s expertise is in advanced manufacturing, testing and producing cutting-edge rotorcraft configurations that fly when operators need them. The factories of the future already exist at Boeing and Lockheed Martin Sikorsky and the team is ready to produce the Future of Vertical Lift.

Discover all that DEFIANT X ® can do at boeing.com/defiantx.