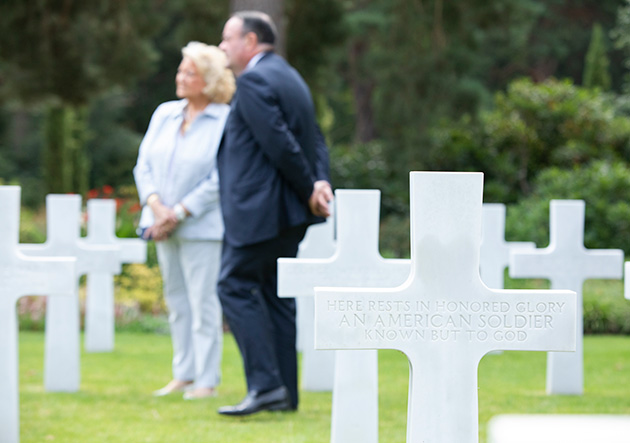 A new partnership between Boeing and the American Battle Monuments Foundation will support educational programming focused on the history of American valor through the lens of the American service members who died and are buried or memorialized overseas.

Boeing and ABMF leadership made the announcement on Wednesday during a memorial wreath-laying ceremony at Brookwood American Cemetery and Memorial in England, a WWI-era cemetery and final resting place for 468 American military dead.

“Boeing has a long history of serving and investing in military, veterans and their families – and our partnership with the American Battle Monuments Foundation is an important extension of that history,” said Ziad Ojakli, Boeing’s executive vice president of Government Operations. “We are proud to support ABMF’s effort to honor the sacrifices of U.S. service members who are buried or memorialized overseas and to engage younger generations through storytelling that keeps alive the memories of the fallen. We look forward to our continued partnership with ABMF as we work to honor service members all across the globe.”

Boeing’s two-year, $200,000 investment will help ABMF establish programming that teaches younger generations about the relevance of service and sacrifice, including the organization’s inaugural “Past is Prologue” essay contest – a program that connects students with adult co-authors to write about one of three pre-selected events from America’s wars.

The partnership builds on Boeing’s commitment to veterans, their families and military communities. As part of Boeing’s veteran investment and engagement strategy, the company partners with leading veterans organizations to provide veterans and their families with essential workforce transition support and recovery and rehabilitation programs that address mental health and advance well-being.

In 2021, Boeing provided more than $13 million across 108 grants in support of veterans organizations globally.

“The ABMF appreciates the support of The Boeing Company as a corporate partner. Together, we will engage multiple generations to keep the legacy of those who fight for freedom alive,” said James Rosener, chairman of the Board of the ABMF.

ABMF is the official partner of the American Battle Monuments Commission, which maintains all 26 American military cemeteries and 32 monuments overseas. More than 218,000 American soldiers, sailors, airmen and Marines are buried or memorialized — those whose remains are unidentified and missing — in hallowed sites away from the U.S. homeland.