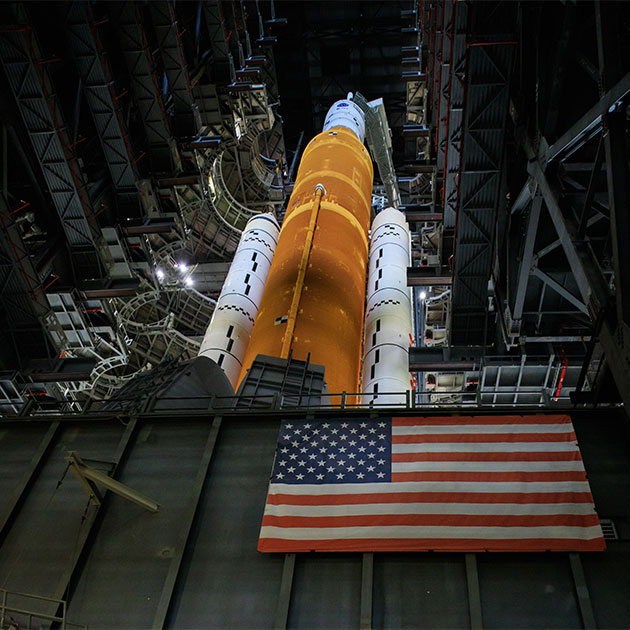 With the recent successful Wet Dress Rehearsal (WDR) for NASA’s Space Launch System in the rear-view mirror, all eyes are now set on the Artemis I launch – which is slated for no earlier than August 29, 2022.

Teams at Kennedy Space Center (KSC) are diligently working to prepare the rocket for its inaugural mission. Poised to lift NASA’s Orion spacecraft into orbit and then onto a precise path to lunar orbit, the Space Launch System rocket will be checked over the next few weeks to certify all of its systems for flight.

“The energy is high,” Natasha Wiest, SLS Launch Engineering Manager, said while reflecting on the momentum building at KSC. “The teams are laser focused. Everyone is committed, collaborating and pushing towards completing the remaining work and ensuring a successful mission.”

Remaining actions include closing out a few items for repair that were identified during WDR – such as repairing a hydrogen leak in the core stage Tail Service Mast Umbilical (TSMU). The leak was linked back to a Quick Disconnect (QD), which is where the LH2 umbilical from the core stage connects to the TMSU. The QD essentially serves as one of the connecting points for the vehicle to the mobile launcher. This action was successfully closed out, and the teams are now retesting the interfaces for quality assurance.

Other maintenance work includes final installation of the Thermal Protection System (TPS) spray foam. TPS is the foam over the vehicle that gives it its iconic orange glow. Final installation of TPS was planned work, as external pieces of the rocket – such as the engine section door – need this critical technology for protection against the extreme temperatures experienced when entering and exiting the Earth’s atmosphere. Naturally, TPS is added to the external portions of the vehicle after work has been completed in that area.

Aside from final maintenance punch lists, the teams will spend their days leading up to launch assessing and testing various parts of the vehicle – such as the Engine Section, Intertank, and Forward Skirt – while the Day of Launch teams sharpen their skills through one final simulation training exercise.

Teams at KSC are well versed in preparing rockets for tests, events, and missions. Earlier this year, engineers completed meticulous and extensive tests to verify system readiness prior to rolling the SLS rocket to Pad 39B for the various WDR attempts. Final preparations for roll out are similar to preparations for launch, except the latter includes additional close outs, paperwork, and assessment such as the Flight Readiness Review (FRR) test.

The impact of the work done across the board by Boeing and NASA teams alike on the Artemis program extends beyond deep space exploration and will soon carry over into everyday life on Earth.

“This isn’t just about flying the world’s most powerful rocket or returning to the moon - although that’s pretty awesome!” Wiest shared. “We are going back to the moon in order to learn and create technologies that benefit how we live on Earth.”

Soon, the world will watch America’s rocket soar into the sky – initiating humankind’s return to the moon, evolving our journey to improve life on Earth, and progressing the human voyage to explore deep space.