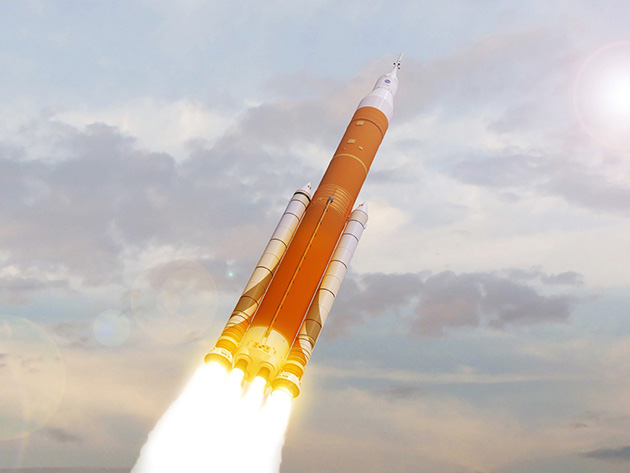 The Artemis rocket with a Space Launch System core stage and exploration upper stage are designed to lift large payloads to the Moon to enable increasingly complex exploration by astronauts.

President John F. Kennedy presented the Moon as a finish line 60 years ago for the race to the Moon between the United States and Soviet Union. Today, the Moon is more of a starting point for a new era of human exploration designed to utilize the unique elements of the lunar environment in multiple ways.

The uncrewed Artemis I flight test will launch the first human-rated spacecraft to the vicinity of the Moon since December 1972. A successful first flight will set the path for astronauts to orbit the Earth on the next Artemis mission and then land on the surface during Artemis II. From that point, NASA will operate a Gateway spacecraft in lunar orbit to host astronauts before they go the surface.

Orbiting about 240,000 miles away from Earth, the Moon dominates the night sky and offers the closest celestial destination to the Earth. About 1,000 times farther away than the International Space Station (ISS), the Moon offers a challenging target that requires substantial launch vehicles such as the Space Launch System built by Boeing in order to lift advanced capsules and heavy modules.

The prospect of developing a booster capable of delivering on the needs of lunar exploration drew Boeing’s John Shannon to the Space Launch System program after years of working space shuttle operations with NASA.

On the surface itself, increasingly capable robotic rovers are to perform a host of tasks beginning with demonstrations late this year. Structures such as habitats and other hardware also are planned by NASA to develop a place where astronauts can work on the lunar surface.

Recently extended to 2030, the ISS will continue operations including missions by astronauts from around the world while Artemis missions make those early steps toward sustainable lunar exploration.

There is, of course, another destination in mind for future exploration: Mars. But the red planet is more than 30 million miles from Earth at its closest point, meaning astronauts would take at least six months to get there and the overall mission would last about two years.

As far away as the Moon is, it still offers a closer area to perfect deep space exploration before venturing deeper into the solar system.

“The thing that makes exploration not only exciting but worthwhile is reaching out to new areas, which are doing by exploring the lunar south pole, and then finding new ways to utilize what we find along with the new technology developed along the way,” Shannon said.