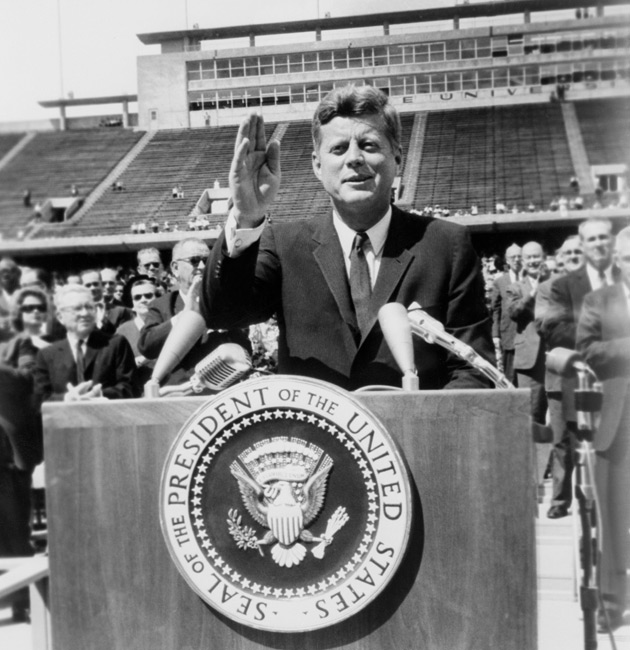 U.S. President John F. Kennedy gives his “We choose to go to the moon” speech at Rice University in Houston on Sept. 12, 1962. NASA is recognizing the anniversary — and its echoes into today’s Artemis missions — with virtual and onsite events.

These words, spoken by U.S. President John F. Kennedy in Houston 60 years ago, defined spaceflight as a national priority for a country with many other concerns on its collective mind. Kennedy said the “high costs and hardships” involved in a crewed moon landing meant success would require every American’s commitment.

The culmination of that challenge almost seven years later with Apollo 11, launched by a Boeing-built Saturn V rocket, is an echo of today’s Artemis missions. Read more about the similarities and differences between Apollo and Artemis.

Artemis, named after Apollo’s sister, will return humans to the moon with bigger goals, more complex challenges and a more powerful rocket — the Space Launch System including the Boeing-built core stage. The Artemis I SLS is being repaired on the pad at Kennedy Space Center in Florida before it launches an uncrewed spacecraft on a flight test around the moon and back.

Just as with the 1960s space race, NASA’s Artemis mission and industry team generate critics as well as supporters.

“Kennedy had already secured Congressional backing and funding for the space program with a speech to a special joint session in May 1961,” said Boeing historian Dr. Brian Jirout. “But maintaining the American people’s commitment required inspiration.”

“President Kennedy rallied the nation by connecting leadership in spaceflight to benefits on Earth. That equation is just as true today,” said John Shannon, SLS vice president and program manager for Boeing. “He talked about investing in a national effort that would provide new knowledge, techniques and tools to be used for the progress of all people. Like Apollo, the Artemis missions’ goal isn’t a ‘flag of conquest.’ It’s the advancement of exploration and discovery that will take us to Mars and beyond.”

Kennedy’s speeches in Houston and to Congress faced up to a moon mission’s challenges and risks.

“Kennedy said the U.S. space program had experienced failures and was behind the Soviet Union,” said Jirout. “He set a bold goal that would ‘organize and measure the best of our energies and skills.’ Boeing and our heritage companies accepted that challenge, and Boeing did it again with Artemis.”

As part of its NASA support, Boeing started operations in Huntsville, Alabama, to work with the agency on the Saturn V. The company built the rocket’s first stage at the Michoud Assembly Facility near New Orleans. Boeing has modernized Michoud and assembles the SLS core stage there today.

“Another example of Boeing’s decades-long commitment to NASA’s vision is that after Kennedy spoke in Houston, he traveled to what is now the Boeing facility in St. Louis to see progress on NASA’s Gemini spacecraft,” said Jirout. 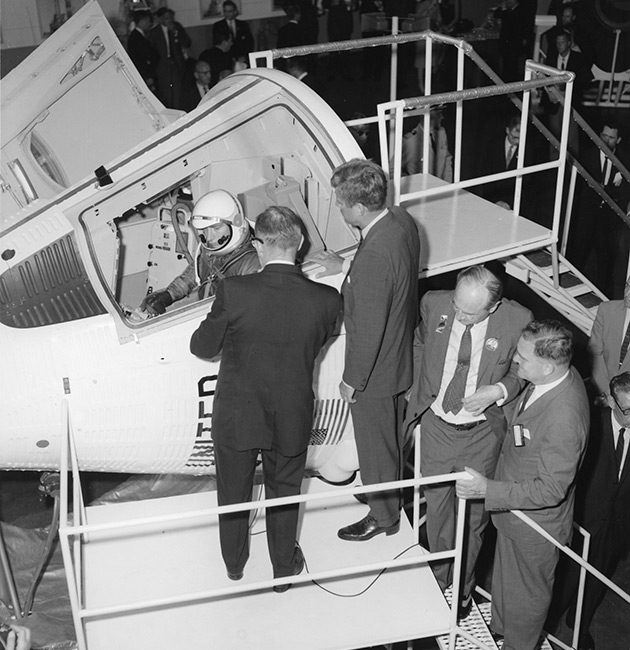 Speaking to McDonnell Aircraft Company employees that day in 1962, Kennedy said, “This is a most important effort in which you’re all involved…. It all comes to you, to those in Houston, to those in Cape Canaveral, to those at [Massachusetts Institute of Technology], to those on the West Coast, who perform the vital functions which make it possible.

“I congratulate you on being part of this adventure.”

NASA is recognizing the anniversary of Kennedy's speech — and its echoes into today’s Artemis missions — with virtual and onsite events. Learn more about Artemis I on Boeing's mission website.