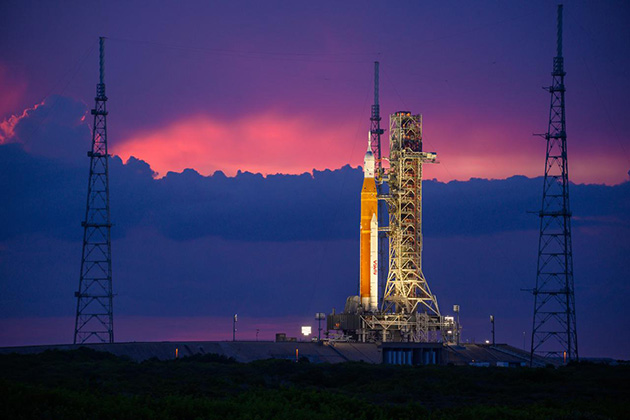 The Space Launch System rocket stands tall at the launch pad as it awaits the next launch attempt.

NASA’s Space Launch System (SLS) rocket — all 322 feet (98 meters) of it — stands ready to launch the Artemis I mission on Wednesday from Kennedy Space Center in Florida. In preparation for this launch attempt, the vehicle was successfully rolled out to launch pad 39B on Nov. 4.

The launch will enable a nearly 26-day flight test to send NASA’s human-rated Orion spacecraft into lunar orbit – a first since 1972. While already tested in numerous ways leading up this launch, the SLS (which includes the Boeing-built core stage and the Interim Cryogenic Propulsion Stage from United Launch Alliance) and Orion have not flown as an integrated vehicle before. This test will allow for evaluation of all of the systems of the rocket and spacecraft, before astronauts make the same journey on a later mission.

“NASA’s launch timeline has seen some delays, but the Artemis I flight test will be followed by missions that carry astronauts and cargo to the moon and beyond — on the only rocket that can do the job,” said John Shannon, SLS vice president and program manager for Boeing. “NASA and the supporting companies are putting safety first and gathering all the data we can to ensure a successful first launch and mission.”

NASA has requested back-up launch opportunities for Saturday, Nov. 19, at 1:45 a.m. Eastern, which is also a two-hour launch window.

Watch the live launch broadcast on NASA TV and at nasa.gov/live starting at 10:30 p.m. on Tuesday, Nov. 15. Follow the countdown and highlights at @BoeingSpace.

Learn more about Artemis I on Boeing's mission website. Read past feature stories about the Space Launch System.