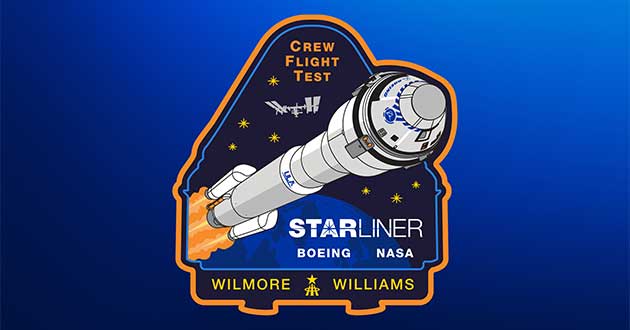 The new Starliner Crew Flight Test (CFT) patch is inspired by NASA astronauts Barry “Butch” Wilmore and Sunita “Suni” Williams who will fly the spacecraft to the International Space Station.

Each color and design element of the CST-100 Starliner’s new Crew Flight Test (CFT) patch takes inspiration from the two NASA astronauts who will be the first to fly the Starliner to and from the International Space Station.

Each detail has special meaning to Commander Barry “Butch” Wilmore and Pilot Sunita “Suni” Williams, who added their personal touches to the development of the patch.

The prominence of orange, for example, surrounding the Starliner spacecraft and the Atlas V rocket, is based on orange historically signifying flight testing. In fact, some refer to the color as “flight-test orange.”

“We wanted to incorporate all aspects of the CFT mission to include launch and the primary focus of the mission as being a first flight test,” Wilmore said.

The orange is also a nod to Wilmore and Williams’ experience in testing new vehicles. Both are experienced U.S. Navy aviators and test pilots, who combined have spent 11,000 hours in more than 50 aircraft, including the F/A-18 Hornet, T-45 Goshawk, H-46 Sea Knight and V-22 Osprey.

Flight patches have served for decades as iconic representations of U.S. human spaceflight programs, flight tests and missions. The patches are composed of symbols, colors and icons that represent the objectives of and significance behind each endeavor beyond Earth’s atmosphere.

Other highlights of the patch and the special meaning each element represents:

“Historically mission patches have included seven stars, which signifies the history of human spaceflight, all the way back to the original Mercury 7 astronauts,” Wilmore said.