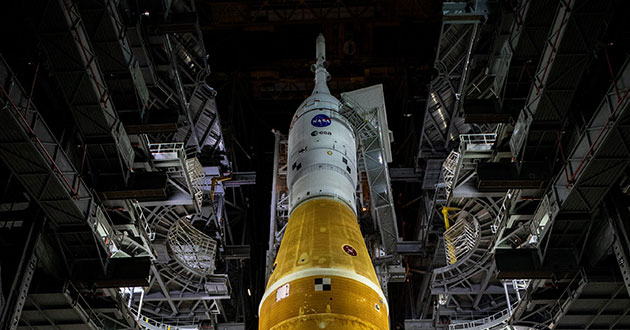 The Artemis I stack, including the orange Boeing-built Space Launch System core stage, is seen in the Vehicle Assembly Building as crews retract work platforms from around the rocket ahead of rollout to Launch Complex 39B.

NASA’s first Space Launch System, or SLS, rocket and Orion spacecraft is set to meet Launch Pad 39B for the first time this week.

The integrated rocket — with a core stage and avionics designed, developed, tested and produced by Boeing employees and partners — will roll out of the Vehicle Assembly Building, or VAB, at NASA’s Kennedy Space Center in Florida on Thursday, March 17 for launch pad checkouts and a crucial prelaunch test known as wet dress rehearsal, or WDR. It will then be returned to the VAB for final launch preparations before rolling out again, this time for launch of the uncrewed Orion to the Moon on the Artemis I mission.

While the core stage passed its own WDR at NASA’s Stennis Space Center in Bay St. Louis, Mississippi, as part of a test series that concluded last year, the Artemis I mission WDR will include a fully integrated Space Launch System including the core stage, upper stages, solid rocket boosters, Orion capsule and new mobile launcher. It will take place about two weeks after rollout. 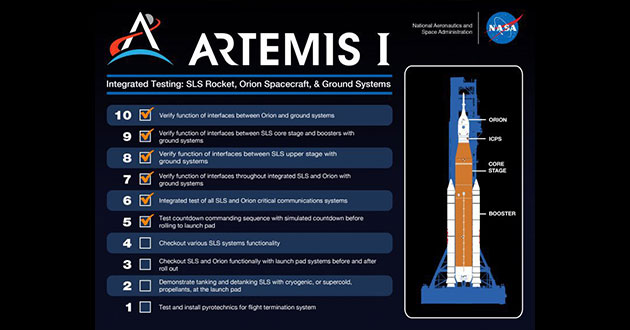 NASA and industry teams have been testing the integrated Artemis I Space Launch System rocket and Orion spacecraft ahead of rolling it out to the launch pad for a wet dress rehearsal.

The SLS Block 1 launch vehicle is massive — at 322 feet (98 meters) tall, it’s bigger than Big Ben in London (315 feet, or 96 meters) and the Statue of Liberty in New York (305 feet, or 93 meters). It has to be that big and powerful in order to produce 8.8 million pounds (3.9 million kilograms) of thrust, enough to transport crews in Orion and heavy payloads to the Moon for sustainable exploration. Future SLS variants will be even more powerful.

The 4.2-mile (6.8-kilometer) trip to the launch pad will take about 11 hours as the crawler-transporter, as big as a baseball infield, slowly moves along a rock-and-asphalt “crawlerway” designed to handle more than 25 million pounds (11.3 million kilograms) of weight.

“This will be the first time a Moon rocket has rolled out of the VAB since 1972. This is a history-making event,” said Jason Grow, SLS lead propulsion engineer for Boeing. “The Space Launch System, which includes the Boeing-built core stage, is the only rocket that’s designed to safely launch astronauts to deep space. The data and insights NASA and its partners will gain from all the steps to launch and throughout the mission will mark the next era of human space exploration.”

Grow said Boeing continues to provide engineering support to NASA for Artemis I as teams build SLS core stages 2, 3 and 4 at the agency’s Michoud Assembly Facility in New Orleans.

Artemis I will be the first integrated test of the SLS, Orion and Kennedy ground systems. It will lay the foundation for increasingly complex missions leading to the sustainable exploration of the Moon and eventually Mars.

After reviewing the results of the upcoming WDR, NASA will set a date for launch.