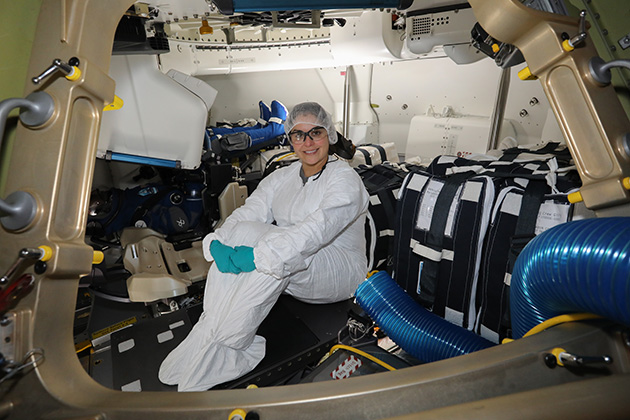 Inside the Starliner crew module prior to the OFT launch in December 2019, Melanie Weber helped design the seats and interior of the cabin. She’s also the Subsystem Lead for Crew and Cargo Accommodations.

When Melanie Weber and senior design lead Mike McCarley started to design the CST-100 Starliner’s crew seats, they were certain of one thing. With Weber at just under 5 feet (1.5 meters) and McCarley at more-than-6-foot-tall (1.8-meter), they wanted to be sure the seats could be easily adjusted to fit the size of any potential crew member. 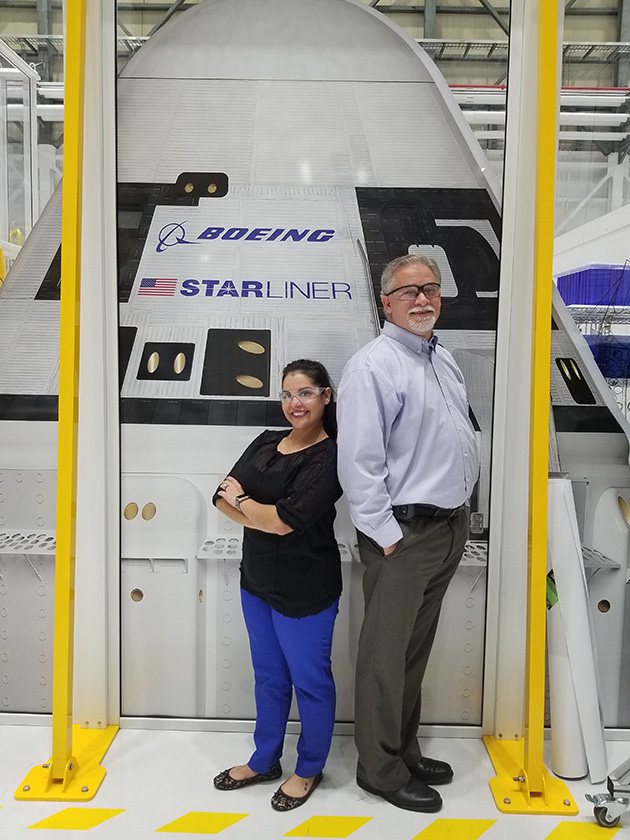 Starliner engineer Melanie Weber stands in 2018 next to Mike McCarley, who is now CST-100 Landing and Recovery Systems lead engineer.

“We needed reusability. We needed a seat for both of us and everyone in between,” said the structural and mechanical design engineer, who has been working with NASA to ensure the seat design meets customer requirements while still having the flexibility to accommodate more people than ever before.

Ensuring crew protection and safety has always been at the forefront.

Weber, who holds a seat patent with McCarley and several other teammates, said she and McCarley’s research included climbing into the Apollo 17 Command Module in Houston, looking at Apollo hardware in a NASA warehouse and researching space shuttle missions. Inspiration also came from the pilot seats in Boeing’s 787 Dreamliner.

Another key component of both the seat design and interior of the capsule has been using 3D-printed materials. The seat has 3D-printed inserts and can be adjusted in up to 5 million different combinations, Weber said. The inserts, which go into the metal seat structure, are custom-made and tailored to each crew member. A negative impression is made of the crew member’s back and 3D-printed.

“That’s what is unique. It is fully adjustable,” Weber said.

Modifications and improvements can be made to enhance comfort and ensure a full spectrum of anthropometric ranges whether people have shorter legs, for example, or longer torsos.

“We’re continually improving the capability of the seat and looking at how to make the seats more efficiently,” Weber said. 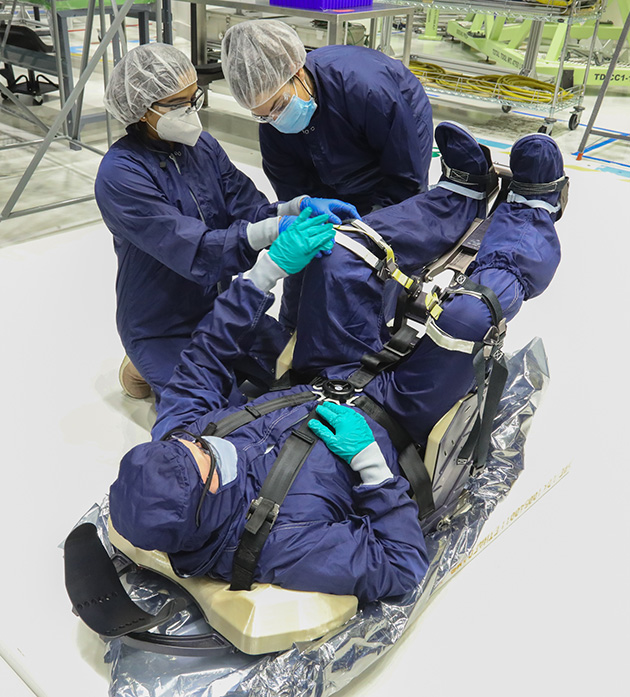 Melanie Weber, right, works on adjusting the seat for NASA astronaut Mike Fincke during a crew seat fit check in February 2021 at the Commercial Crew and Cargo Processing Facility.

Other interior parts of the crew module cabin also are 3D-printed, including covers that go over wiring and other components as well as 3D-printed air conditioning ducts.

Weber is working her dream job on Starliner, which she sees as a way to serve her country. She comes from a family with strong service in the military, including grandparents who served during World War II. Her grandmother was a crane operator and one of the original “Rosie the Riveters” — women who worked in factories and shipyards during WWII.

“There’s always been a deep connection with me and my family to serve our country and I’m doing that by working on the space program. I love what I do,” Weber said.

In the eighth grade after taking a trip to NASA’s Johnson Space Center and then later watching the movie “Apollo 13,” she knew she wanted to be an aerospace engineer.

“I realized then I had a passion for spaceflight. I was enamored by the events that occurred [during the Apollo 13 mission] and what the engineers had to do to bring the astronauts home,” Weber said. “I always said I wanted to help design and build a spacecraft that was safe for astronauts and to bring them home safely.”

Following the Space Shuttle Columbia tragedy while in college at the University of Texas at Austin, her desire only grew. After graduating and spending three years working on the F-22 Raptor fighter aircraft for Lockheed Martin, she got her chance to come to Boeing in 2008 and work on the on-orbit configuration and installation team supporting the International Space Station.

Just shortly after the last shuttle mission, she joined Starliner in 2011 as part of an engineering rotation program and selected the interior cabin as the area of the spacecraft she wanted to help develop. Her work toward safety has earned her the Silver Snoopy Award presented by NASA astronauts for outstanding achievements related to human flight safety or mission success.

She’s had the honor of working closely with astronauts not only properly fitting them into seats for upcoming crew missions, but she also is the Launch Pad Team lead helping to build procedures and extensive training to ensure safety of the team and the crew prior to launch. 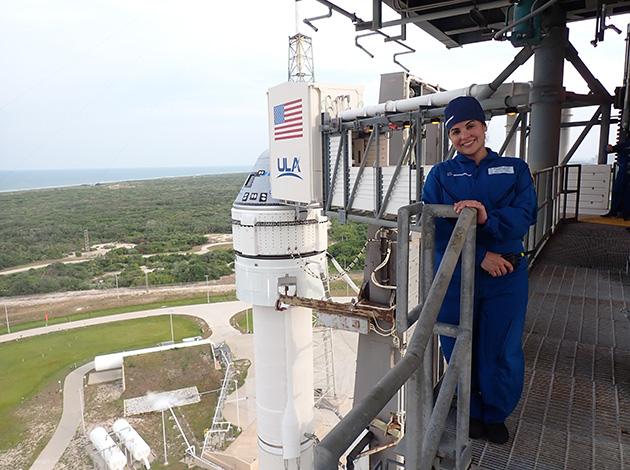 Melanie Weber, Launch Pad Team Lead, outside Starliner on top of United Launch Alliance’s Atlas V rocket the day of launch on May 19, 2022.

“We are at the launch pad within minutes of launch and assisting crew members into their seat. My team is the last team to see the astronauts before they launch,” she said. Working so closely with astronauts, who have actively helped with the cabin design, has been “part of a dream and extremely educational,” she added.

Weber relies on astronauts to tell her how things work in zero gravity. “I bounce ideas off of them to know if the designs will meet their needs,” Weber said.  “I love the fact that any of the astronauts can call me or text me with any concern or request they have and I love being accessible to them. It means a lot that they can trust me. I want them to know I will always have their best interest and safety in mind.”

Outside of work, Weber also has a strong need to give back and help in the STEM fields of science, technology, engineering and math — especially encouraging Hispanic youth. A lifetime member of the Society of Hispanic Professional Engineers (SHPE), she was recently appointed to the organization’s board of directors.

“Hispanics make up only 7 percent of all STEM fields, though Hispanics make up about 20 percent of the general population. SHPE’s primary objective is to help close that gap,” Weber said. She speaks to various college and community groups at least six times a year.

“I love encouraging people to pursue STEM fields,” Weber said. “You don’t see a lot of people who look like me who are women or who are Hispanic in STEM fields. I think diversity and inclusion is extremely important. That’s how we can make amazing things — because we do have that diversity.” 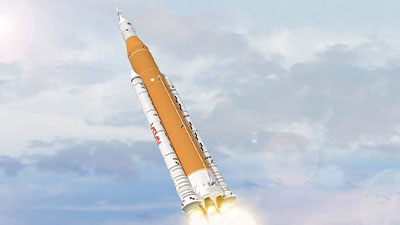