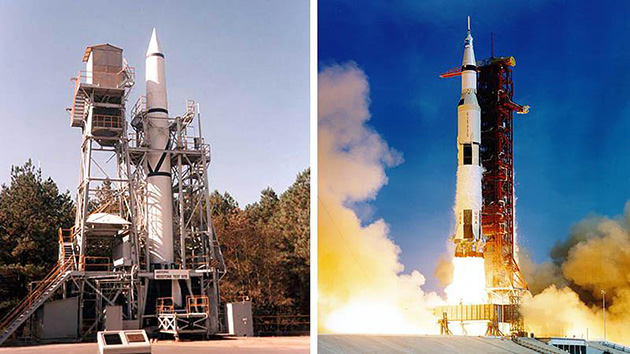 Therese Suaris didn’t know anyone in Huntsville, Alabama, when she moved there in 2012. She had left a job at NASA in Washington, D.C., to work on Boeing’s Ground-based Midcourse Defense program, part of the Missile and Weapon Systems portfolio. 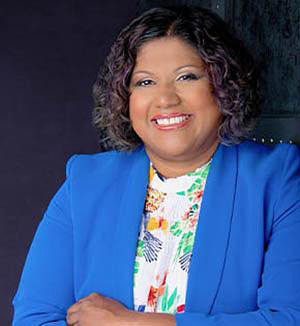 Suaris immediately threw herself into the job, performing systems analysis for flight and ground testing.

“Boeing was the only company I applied to from NASA, and I knew this is where I wanted to be,” Suaris said. “I loved all the moving pieces and the complexity of the job.”

Soon after Suaris arrived, she attended a celebration commemorating the 50th anniversary of the Boeing Huntsville site. Suaris heard stories about its legacy — Saturn V and the Apollo program, Patriot Advanced Capability-3 missile seekers, cutting-edge research and development — and knew she had landed in the right spot.

“Huntsville seemed like a place where an inquisitive engineer could get broad exposure to a number of defense and space programs,” Suaris said.

Rocketing into the space race

Five decades earlier, Boeing was still new to Huntsville. U.S. defense work in the area had begun shortly after World War II. But following President John F. Kennedy’s assertion that America would send people to the moon by the end of the 1960s, Boeing became an integral part of the space race, and Huntsville was crucial to its success. 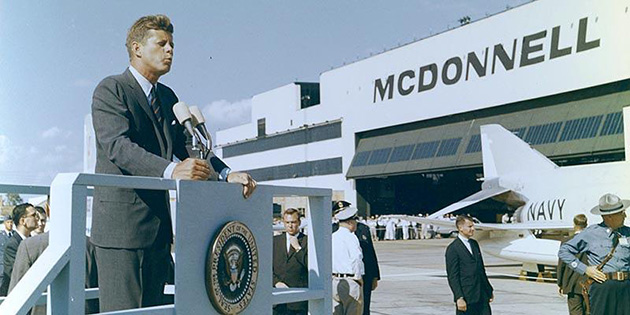 President John F. Kennedy gives a speech at McDonnell Aircraft Corp. in St. Louis before viewing the Gemini space capsules and meeting with company president and later chairman and CEO James McDonnell in 1962.

Starting in an old cotton mill on Meridian Street, Boeing made significant investments in the Huntsville area, helping establish it as the “Rocket City.” When the company was awarded the contract to build the Apollo program’s launch vehicle, the Saturn V rocket, Boeing (along with heritage companies North American Aviation and Douglas Aircraft) significantly ramped up work in Huntsville.

“It was in the early 1960s that Boeing in Huntsville established its identity as a site excelling in developing space launch vehicles and missile systems,” said Brian Jirout, Boeing corporate historian.

One of the first things Marc Howell remembers about Huntsville were the vibrations. He was three years old when his family arrived in 1963, during the height of testing for Saturn V boosters. Those tests shook the whole town.

He started work in that old cotton gin and told his son the floors were blackened from cotton seed oil. But his team quickly outgrew that facility as the work accelerated. Parley Howell told his son it took just 17 months from the contract award for the rover until the first product delivery.

“My dad would come home and watch space launches involving the rover he worked on,” Howell said. “He was so proud of his work.”

Boeing built the Saturn V first stage booster, which was Apollo’s launch vehicle, from 1969 to 1972. The Apollo program work led to a huge industry expansion in Alabama. By 1966, Boeing had 4,500 workers in Huntsville.

“Apollo was also one of the first large-scale systems integration programs,” historian Jirout said. “Boeing helped pioneer that way of organizing a massive project into one program.”

As work on Apollo wound down, Boeing transitioned to other space and defense projects — including the Missile and Weapon Systems work that first drew Therese Suaris to the area — strengthening the company’s presence in the community.

Like his father, Parley, Marc Howell pursued a career with Boeing, joining the Huntsville site in 1982 as a janitor while working toward his electrical engineering degree from the University of Alabama-Huntsville. Boeing paid for both his undergraduate degree and his master’s degree in systems simulation, an educational benefit the company still provides today through its Learning Together Program. 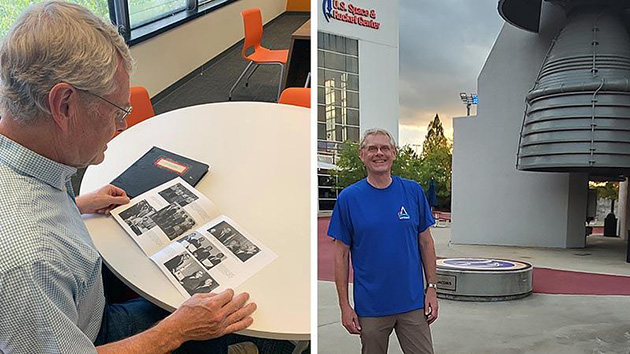 In 40 years with the company, Howell has worked on the International Space Station microgravity laboratory and technology testbed, on orbit for more than 20 years, the Ares rocket, and commercial programs before joining the Boeing team behind NASA’s Space Launch System — the rocket that will return humans to the moon before heading to Mars and beyond — as a senior software engineer. Howell has seen the company evolve from using paper and typewriters to today’s model-based engineering and advanced systems integration tools.

“With advancements in technology, Boeing has kept maturing into a better engineering company,” Howell said. “We have about a dozen interns and new hires on my team, and when I see their enthusiasm and good work, I know the future is in good hands.”